An expansion of existing plant to produce 97,000 TPA of MS Billets and 65 MW of Power Generation is being proposed by M/s Salasar Steel and Power Limited, Raghuveer Pradhan from Ekta Parishad on behalf of the local communities of Raigarh district of Chattisgarh has requested Centre for Science and Environment (CSE) to technically evaluate the Environmental Impact Assessment (EIA) document of:

M/s Salasar Steel & Power Limited is an existing plant operating 60,000 TPA Sponge Iron Plant, 3,90,000 TPA of Washed Coal through Coal Beneficiation and Power Generation of 4.5 MW through WHRB & 10.5 MW through CFBC in Gerwani Village, Ambikapur Road, Raigarh, Chattisgarh. Now as a part of proposed expansion it has been proposed to produce 97,000 TPA of MS Billets and 65 MW of Power Generation through CFBC under the proposed expansion.

Project location: The proposed expansion project involves establishing of 3 x 10 MT Induction Furnaces to produce 97,000 TPA of M.S. Billets and 65 MW power plant (through CFBC boiler) in addition to the already existing 60,000 TPA Sponge Iron plant, 4,80,000 TPA of Coal Beneficiation plant and Power Generation of  15 MW out of which 4.5 MW is through WHRB & 10.5 MW through CFBC. The proposed expansion will be taken up in the existing plant premises only i.e., at in Gerwani Village, Ambikapur Road, Raigarh, Chattisgarh.

·        And to improve the power scenario in Chattisgarh in accordance to the Energy policy of the state.

1. Cumulative impact: The industry is located amidst many other industries chiefly comprising of Sponge iron industries. Majority of these industries belong to sponge iron and steel industries which are highly polluting industries (belong to red category). The report fails to give the current depiction of pollution in the area, over all impact of these industries on the environment is completely missing. The project would only add to the worsening of condition. How much ever conservation methods are practices, environment would be damaged due to presence of large number of polluting units in the area which the EIA fails to notice and give preventive measure. The EIA speaks as an individual project basis which would not suffice to predict or mitigate the impact on the environment which is already deteriorated.  Such an important environmental concern cannot be neglected for an industry to starts it expansion project which would only add on to the existing pollution. The report also fails to specify location of other industries in the nearby areas and cumulative impact of these industries.

2. Impact on Kelo River: The water source for the proposed expansion project is Kelo River. The amount of water required for the expansion would be 6200 cum/day and total water consumption including the existing industry would be 7843 cum/day. Extraction of such huge amount of water from the river on daily basis would definitely result into a sever impact on the water body. Kelo River is already being over exploited. Already exiting industries are drawing water from this river. This expansion would only add to the resource consumption and in turn exploit the river. The details regarding the flow of water in the river, number of other industries which draw water had to be addressed in the report which is absent. The river flow data, particularly the lean period flow (i.e. in summer) is critical because River Kelo is being heavy exploited by the industries in the Chattisgarh. Every industries in Chattisgarh claimed that they would draw water from Kelo but failed to provide whether river has sufficient water to hold industries or not. Report claims that there would be no adverse impact on the water environment due to the expansion (Pg 4 – 8), however this statement is not justified as such huge amount of water drawn would have significant impact hence it is subjective in nature. Kelo River is also used for domestic purpose by many people in the surrounding areas hence the impact on the river cannot be neglected and proper mitigation plan has to be given in order to protect the pristine water bodies of the area.

3. Forest Land: The surrounding area up to a 10 KM radius around the plant consists of 32.2% of forest area (page 3 – 25). The report also claims that the there are four reserved forest and seven protected forest in the study area (pg 2 – 3). However the report remains silent on the impact of this upcoming project on this forest land and forest area. The project would have a significant impact on the forest land and the flora and fauna of the forest. Claiming that the impact is negligible or no impact is anticipated is quite absurd. The deterioration in the air quality due to the upcoming project and the existing industries would definitely destroy the forest land. This impact has been neglected and biodiversity of the area being sensitive cannot be neglected. Proper conservation plan for the forest area has to be worked out for the nearby forest areas which will be affected.

4. Impact on flora and fauna: A list of flora and fauna in the study area is given in the report (Pg 3 – 30 to 3 – 32).However the report fails to assess the impact of the upcoming project on the flora and fauna of the area. The surrounding area consists of some of the schedule I animals. But mere mention of these animals in the area does not suffice. Proper mitigation plan to protect these animals is necessary. Also whether the data taken into account is based on primary survey or not is not clear in the report. Such huge development of a steel plant and power plant would definitely impart ecological harm to these forests but the EIA fails to capture such an important issue pertaining to the project.

5. EIA states that Electro Static Precipitator (ESP) will be installed with the stack as pollution control equipment (page 4 – 12) and claimed that the emissions from stack will be less than 50 mg/Nm3. However EIA report failed to provide the technical specification of ESP such as number of field and area of collecting electrode etc. Due to lack of technical specification on ESP, it is doubtful that ESP will achieve the standard of less than 50 mg/Nm3

6. The loading and unloading areas for the raw material are not clearly mentioned whether open or closed. This would give rise to dust and air pollution. This has to be closed in order to decrease the air pollution in the nearby areas and hazards that it might cause due to the dust. Maximum amount of air pollution is generated in handling of coal. This would create a nuisance for the nearby local people. This impact has to be mitigated using proper measure like covering the area. Loading and unloading mechanism has to be automated to the extent possible.

7. During construction phase, huge amount of dust will be generated. This would have severe impact on the close by bio diversity, forest areas as well as people residing in the nearby villages. Sprinkling of water is inadequate in terms of mitigation measure that is being proposed by the project proponent. Proper care with respect to air pollution during the construction phase has to be taken which the report fails to address.

8. Chattisgarh is already a smoke laden district with high air pollution. This is the result of high industrialization in the area and obviously Raigarh, district of Chattisgarh is also not spared from this impact. . Ambient air quality data from the State pollution control board or other secondary source has not been quoted in the report. This makes the air quality impact prediction liable to improper prediction. Use of secondary data along with the primary observation would have made the ambient air quality impact prediction more reliable and justifiable.

9. The report does not talk about the migration that would occur during the construction or operation phase. Migration is an important phenomenon which exhibits a huge social impact on the people residing in the nearby areas. The report does not state the significant change in demographic profile that the area would undergo. However the EIA fails to predict the impact of this migration on the local community which is an important impact. The local resources would be affected. This impact cannot be neglected when s big project is being setup in a rural area. 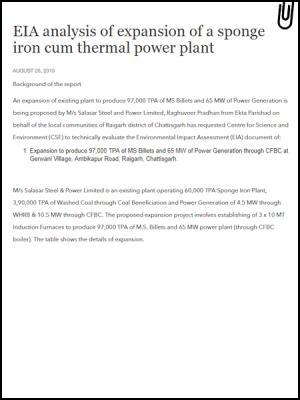