UCIL identified two Uranium blocks named Killung and Rangam in West Khasi hills district of Meghalaya, with total reserves of 9.22 million tones with rated capacity of 0.375 MTPA. The project has acquired 351 ha of land for the establishment of mines, processing plant, DCDA plant (for H2SO4 plant), township and other facilities.

Both mining blocks will produce 9.22 million tones of Uranium ore and 62 million tones of waste materials (overburden) in 24 years. The Killung block is divided into Killung A and Killung B and Rangam block will mine separately as a single block. The executive summary is silent on whether all blocks will be operated simultaneously or will operate in stages. However, it seems that both blocks will be mined simultaneously because there are wide various in uranium percentage in the ores of Killung A and Killung B and Rangam.

Location wise project is very sensitive because project is located in hilly terrain and receives very high rainfall. Further, project site is an important watershed of various tributaries and rivers. Therefore, estimation of silt load and erosion potential of an area is crucial, however the executive summary has failed to address this significant issue.

Executive summary is silent on quantity and quality of tailing wastes, the report states that tailing waste will be stored initially in tailing pond adjacent to plant and disposed off in mined out area along with overburden. This will commenced from the fifth year. According to the executive summary, processing plant and tailing ponds are located in the watershed of Mawkhan River, which is a tributary of Wah Phodthra River. Hence a potential risk of surface water contamination is high. Moreover, executive summary is competently silent on the impacts of project on the watershed and also failed to highlight the safeguard strategies. The executive summary is also silent on quality, quantity and mode of disposal of wastewater from the process plant.

Executive summary has failed to provide information on the land use pattern of acquired land and landuse pattern in buffer zone such as forest cover, agricultural land, wasteland etc.

The proposed uranium ore handling and its management seem very poor. The crusher will crush ore at the mine pit; crushed ore will be transported continuously to the processing plant by the dumper after covering a distance of 5.5 km. Further, the crushed ore is proposed to store in open at the processing plant. Hence, high radiation risk could be anticipated through air borne particles. Further, multiple handling of ore, coupled with dumper transportation and open storage would likely to increase the risk of air and water contamination.

The background level of gamma radiation at the proposed site is comparatively higher with respect to global average 0.9mSv.y-1. According to the executive summary, the radon level around the proposed site was 60 to 91 Bqm-3 and in the village area it ranges from 6.7 to 23.8 Bqm-3, which is comparatively less with respect to prescribed range (workplace range 600 to 1500 Bqm-3, dwelling range 200 to 600 Bqm-3) given by ICRP. The hilly terrain coupled with high rainfall clearly indicates that entire area is highly vulnerable to pollution. It can be anticipated that both silt and radioactive substances would contaminate the exiting rivers in the area once the mines and plant begins to operate at full rated capacity. It could be anticipated that background concentration of radioactive substances would likely to increase in future because of site sensitivity and poor proposed solid waste management (mine i.e. overburden, ore processing plant i.e. tailing waste). The natural river would be worst impacted by overburden and tailing pond because tailing pond and ore processing plant is proposed in the watershed of the river.

The executive summary is silent on flora and fauna status in the study area and failed to provide information on biodiversity such as presence of scheduled listed species, forest cover area and forest density. According to forest department, fauna in West Khasi district is characterize by the presence of elephants, apes, monkeys, deer, sambar, tigers, wild boars, bears, leopards. It clearly shows that schedule I listed animals exist in the region but executive summary failed to provide any information on flora and fauna characteristic in the study areas.

Executive summary is silent on the overburden management; the report states that around 39 ha of land are earmarked for the initial dumping of overburden materials. It seems that at the initial stage of mining, external dumping will be undertaken. If this is the scenario, then high siltation risk, increase of radioactive contaminants in the surface water could be anticipated. The risk probability would be of high magnitude because mine lease areas provides water to Umshopphnew and Wahphodthra rivers, both these rivers finally drains in Kynshi River. The report also states that mine will generate 2.5 million tones of overburden per year but failed to provide basic information like commencement of backfilling and mine reclamation.

The plant will also generate large quantity of solid waste from the process, DCDA plant, ETP plant. But no information is available on the characteristic, quantity and mode of solid wastes disposal. 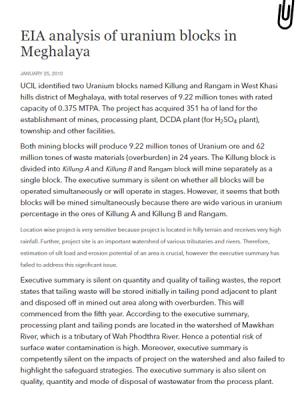