The Kelo Irrigation Project is proposed on the Kelo River in Raigarh district of Chattisgarh state. The Proposed irrigation project is located across the river Kelo near Danot Village of Raigarh tehsil. It is inevitable that any development projects have both positive and negative impact on the environment.

Similarly, this project has both positive and negative impact. The best part of this project is that it has tried to mitigate the negative impacts to a great extend. Let us start from site selection; site selection has been done based on the geological characteristic, so that project would cause submergence to minimum area. Further, in view of the fact that the entire water spread area of the dam between two small hillocks on either sides of the proposed dam.

Primarily, the main objective of this project is to supply water for irrigation, in addition to domestic and industrial supply, which account for just 14.6 % of the gross storage capacity of the reservoir. The project will bring benefit to 175 villages located in district Raigarh and Janjgir Champa by providing water for irrigation. The project will supply water to 26800 hectares (22800 ha Kharif / 4000 ha Rabi) of land for irrigation. Besides above project will also generate income through fishery. The project will also generate income at the construction stage, according to the EIA report project will give employment to 7000 to 8000 laborers for 30 month. In order to reduce environmental impacts at the construction stage, project has provision for adequate sanitation facilities, solid waste management and septic tank for the water treatment.

The project will submerge around 1320 ha of land, of which around 361.90 ha is the forestland. This is the negative impact of this project and requires sound mitigation to reduce it. The EIA report has mentioned that loss of forestland will be compensated by compensatory afforestion. The EIA also mentioned that money around Rs 186.79 lakhs has been paid to the forest department for the afforestation against loss of 361.9 ha of forestland. This is considered as good initiative. In addition to this, project will also displace local people either due to land acquisition and submergence. According to the EIA report 21 villages get affected by the project of which houses submergence will be in five villages, viz. Danot lakha, Ujjalpur, Gerwani and Chandbauna and land acquisition will be in the remaining 16 villages. The best part of this project is that Kelo project has undertaken separate social impact assessment and tried to streamline the social and economic issues of the project affected families / displaced families. Further, resettlement plan is quite exhaustive and good; over an above resettled will be done as per the provision of National and Chattisgarh R & R policy 2007.

One of the major problems associated with the irrigation or hydel project is the siltation in the reservoir, which in turn reduces the life of reservoir. In order to reduce the siltation impact, the project proponent has developed very sound CAT plan (Catchments Area Treatment). The main objective of CAT plan is to prevent further degradation of land and deterioration of natural eco system in the catchment area (free catchment area) of the reservoir, arrest soil erosion and thus prevent or minimize siltation. The total financial requirements allocated for conservation of bio-diversity including land management and fisheries development works is around Rs. 600 lakhs which exclude the cost compensatory afforestation.

Based on the EIA report it seems that project is good because this project will improve the productivity of the region and also meets the drinking/industrial water requirement. Based on the location of the project, there seems two main critical issues firstly, loss of forestland and secondly displacement of people. Based on the facts and figure and after mitigation measures, it seems that positive impact of this project is more as compared to negative impact. For instance, in order to reduce impact on forest land, around 746 ha of land earmarked for reclamation by compensatory afforestation. Further, forestland, which gets affected by submerges is degraded forest and lacks schedule listed animal, EIA also mentioned that there is no animals corridor in the area. To mitigate social issues, the project has respected social and economic aspects of affected/displaced families by providing adequate compensation and rehabilitation. Resettlement and rehabilitation measures will be done as per the provision of National and Chattisgarh R & R policy 2007. 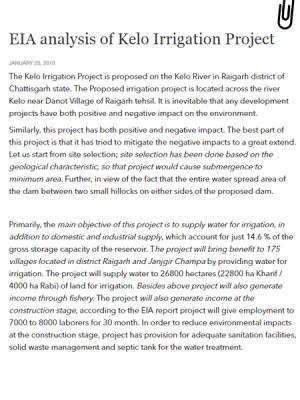