But keeps it high on caffeine 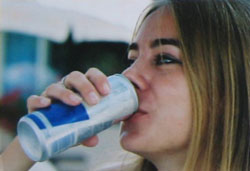 The Food Safety and Standards Authority of India (FSSAI) have moved ahead with finalizing rules for energy drinks. They seem to have taken the steps in the wake of the rising health concerns of these energy drinks.

The FSSAI began discussion on energy drinks in 2010 and it is now that they are close to notifying regulations for caffeinated drinks. The matter was discussed at the ninth meeting of the authority on June 6. The draft regulation - yet to be published - puts the upper limit of caffeine in a caffeinated beverage at 320 mg per litre or parts per million (ppm).

First up, they have decided to strip the drinks of its ‘energy’ tag. Once the rules will be notified, these will be called ‘caffeinated beverages. Secondly, they have made strict labeling rules for these drinks. The drinks will come with a statutory warning and carry a ‘high caffeine content’ label. The labels will also have to specify in big bold letters on the can—‘Not recommended for children, pregnant?women, persons sensitive to caffeine and sportspersons’ and ‘Not to be consumed more than two cans a day’. No nutritional or health claims will be allowed to be made on these drinks.

Though the labeling rules have been made strict, the policy makers have overlooked a few crucial points. Though removing the energy tag is a wise move, creating a separate category for energy drinks will simply open the floodgates for many more such proprietary drinks that are in fact not needed.

Then what remains untouched is also the caffeine content, which is the most crucial part. The FSSAI has decided to set the caffeine limit at 320 ppm (parts per million or mg/l). In India, caffeine for carbonated beverages was capped at 200 ppm (mg/l) as the safe limit. It was due to CSE's effort in 2009, that the caffeine limit was further scaled down to 145 ppm (mg/l).

By drafting separate rules for ‘energy drinks’ and by allowing upto 320 ppm of caffeine, which is almost thrice the limit set for carbonated beverages, the regulators will not only compromise public health but will also contradict their own decision.

In the second meeting of the expert group, that was held on April 6, 2010, the members had observed “there was an element of risk with reference to addition of caffeine in the Indian context”. The expert committee pointed out that caffeine is not an additive but a chemical with addictive property. Its functionality at 320 ppm of caffeine is not justified. There is no justification for fixing a cut off limit at 320 ppm.”

The expert group had also called for a detailed study on caffeine and its impact. The risk assessment report of National Institute of Nutrition (NIN), submitted to the FSSAI, stated the current consumption of caffeine in India is low and there is scope for more consumption. But the NIN report is largely based on literature review. There is no sample study, which has recorded daily intake of caffeine by people and the impact any additional intake will have. By estimating consumption on a per capita basis, which is quite low considering India’s billion plus population, the NIN report has actually discounted the adverse impact of energy drinks on a large caffeine consuming section of the population.

The cap that FSSAI is proposing for energy drinks—320 ppm caffeine and two cans of energy drinks per day—means a person will consume about 160 mg caffeine every day from energy drinks alone. The cap of 145 ppm of caffeine is especially of concern since these energy drinks are openly sold and children buy it. Not understanding the

“Low doses of caffeine—20 mg to 200 mg/day—have been found to improve mood and alertness. But caffeine in energy drinks can easily exceed the amount necessary to promote cognitive functioning,” says Anoop Misra, director of Centre for Internal Medicine at Fortis Hospital in Delhi.“This may result in high blood pressure and heart rhythm irregularity. Certain deaths due to consumption of caffeine through these beverages have also been reported,” he warns.

Countries like Denmark, Uruguay and Turkey have banned energy drinks altogether while Sweden has banned its sale among children. The European Food Safety Authority mandates that energy drinks with over 150 parts per million (ppm) or 150 mg per litre caffeine content should be labeled as ones with “high caffeine content” and the exact amount should be indicated; Australia has banned energy drinks with over 320 ppm caffeine level and proposes to classify them as pharmaceutical products.

In a scenario where not even basic data is available, a cap of 320 ppm caffeine in ‘energy drinks’ should not be allowed. Precautionary principle should be followed and the caffeine standards in these drinks should be restricted to the level of caffeine in carbonated beverages.

But a word of caution: These energy drinks are not really required. They neither add to the health nor energy levels in our bodies. Moreover, with caffeine sources such as coffee, tea and soft drinks, there is enough caffeine being consumed in India. Moreover, a large proportion of energy drinks are being misused and consumed with alcohol and this combination hampers cognitive functioning.

See also: For more on energy drinks book your copy of Food as Toxins