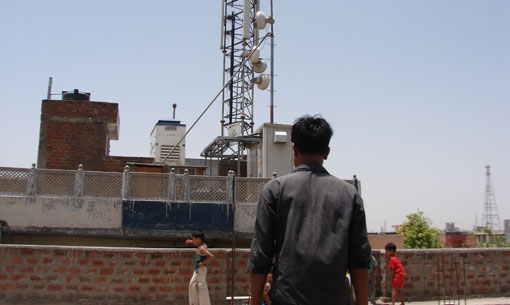 The impact of radiation from mobile phone towers on human beings and wildlife has been mooted time and again. The remarkable increase in mobile phones users in the country and mushrooming of mobile tower installations in every nook and corner of cities and towns have raised concerns on its probable impact on wildlife and human health. Owing to a number of media reports and public concerns the Ministry of Environment and Forests has come out with an advisory on the Mobile Towers to minimize their impacts on wildlife. The Advisory is a result of a study conducted by an Expert Committee constituted by MoEF to research the possible impacts of mobile towers on wildlife including birds and bees.

The MoEF constituted the Committee to study the impacts of communication/cell phone towers on August 30, 2010. The Committee comprised of officials from the Department of Telecommunication, Indian Council for Medical Research, Department of Biotechnology and MoEF submitted its report in 2011 and found out that the Electro Magnetic Radiations (EMR) interferes with the biological systems. The findings of the Committee were based on the various national and international studies conducted so far on the plausible impacts of EMR on living beings. The findings revealed that EMR is a potential cause of decline of animal populations and deterioration of health of plants and humans living near radiation sources.

In the wake of such alarming findings the MoEF came out with a list of actions to be undertaken by agencies involved in providing, regulating and dealing with the EMR based services. Action points for different stakeholders have been devised in the advisory with an objective to mitigate and avoid the impacts of EMR.

MoEF: The MoEF has instructed to notify the impacts of communication towers on wildlife and human health to the concerned agencies for regulating the norms for notification of standards for safe limit of EMR.

State/Local Bodies: The Advisory has assigned the Urban Local Bodies (ULBs) with the task of regular monitoring and auditing in urban localities/ educational/hospital/ industrial/ residential/ recreational premises including the Protected Areas and ecologically sensitive areas. The ULBs are also entrusted to carry out an ‘Ecological Impact Assessment’ before giving permission for construction of towers in wildlife and ecologically important areas.

Department of Telecommunications: The Department has been advised on the following things:

Health Impacts
Every antenna on cell phone tower radiates electro-magnetic power. One cell phone tower is being used by a number of operators, more the number of antennas more is the power intensity in the nearby area. The power level near towers is higher and reduces as we move away. The Advisory by MoEF doesn’t throw much light on the health impacts caused by the radiation emitted from Mobile Towers. It simply says that the EMR interferes with biological systems and is responsible for deterioration of certain wildlife species. However, many instances of diseases among human beings and disorders in some species of wildlife due to exposure from the cell phone radiation have been witnessed in the past. Also, the Advisory deals only with the impacts of Mobile Tower radiation on birds and bees totally excluding the impact of radiation on human beings.

A report submitted to DoT by IIT Bombay (2010) explains how the cell phone tower’s radiation affects the birds, animals and wildlife. According to the report the surface area of bird is relatively larger than their body weight in comparison to human body so they absorb more radiation. Also the fluid content in the body of the bird is less due to small body weight so it gets heated up very fast. Magnetic field from the towers disturbs birds’ navigation skills hence when birds are exposed to EMR they disorient and begin to fly in all directions. A large number of birds die each year from collisions with telecommunication masts.

Among humans the EMR may cause cellular and psychological changes in human beings due to thermal effects that are generated due to absorption of microwave radiation. The exposure can lead to genetic defects, effects on reproduction and development, Central Nervous System behaviour etc. EMR can also cause non thermal effects which are caused by radio frequency fields at levels too low to produce significant heating and are due to movement of calcium and other ions across cell membranes. Such exposure is known to be responsible for fatigue, nausea, irritability, headaches, loss of appetite and other psychological disorders. The current exposure safety standards are purely based on the thermal effects considering few evidences from exposure to non thermal effects.

Need of the hour
The Advisory brings into light the impacts of radiation from cell phone towers. It has laid down precautionary measures that should be followed by stakeholders still; a lot needs to be done to implement the guidelines and sensitize people regarding the perils of radiation. Some Pollution Control Boards, Department of Health & Family Welfare and Department of Environment of some states such as West Bengal, Tripura, Assam, Delhi, Himachal Pradesh, Maharashtra, and Kerala have prescribed guidelines for safe installation of Mobile Phone Towers and safety exposure limits for Electromagnetic (EM) Radiation from the mobile tower antenna. However, many states are yet to comply. The state/local bodies, environment and forest department and DoT will have a humongous task ahead considering the number of mobile phone towers every city, town and village have. The agencies will have to play a proactive role in granting permission to the operators, monitoring the radiation emitted and disseminating awareness among the masses. The track record of ULBs and environmental departments have been dismal in sectors which are their major functional areas and it is yet to be seen how they carry out the new duties delegated to them.

Gujarat pollution board gets a makeover in efficiency

Show cause notices to 11 Nashik factories for polluting Godavari