A two-day conference on environmental compliance and enforcement that concluded recently in Kolkata gave me a rare chance to listen to environmental regulators from around the world– USA, Sweden, Kenya, Australia and Norway.

The choice of the city for the conference seemed very appropriate. B K Dutta, Chairman of the West Bengal Pollution Control Board, who welcomed the delegates, informed that Kolkata was the first city ever to have an environmental law—the Smoke Nuisance law—as far back as in 1906. The programme started with a lecture by Robert V Percival, Professor of Law, of University of Maryland, USA. 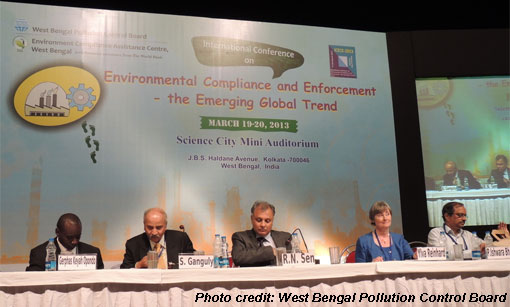 Lessons from the US
It was interesting to know that non-compliance is not something limited to developing countries. “Two-third of corporate counsels admit that their companies have recently violated the environmental laws in USA. It is just not possible to achieve full compliance,” said Robert. The US is also facing the same problems regulators face here—detecting violations and proving them in court. But the country has a provision under its environmental law that has proved rather successful. Under the protection of whistle blower provision, companies are forbidden from firing workers reporting violations. Robert said that a large number of cases of non-compliance are reported by workers and the policy has led to significant success. In order to maintain transparency on environmental violations, the US Environmental Protection Agency (USEPA) also maintains a website where list of wanted environmental criminals are posted http://www.epa.gov/fugitives/. Indian regulators could take a cue from the US on this. As of now, there is no such database available in the country.

Like India, USEPA also has penalty provisions for violations. But the process is effective there and provides scope for reduced penalty in case a violator makes voluntary disclosure. In case, there is repeat violation, penalties are severe. What’s more, the penalty is directly proportional to the economic benefits that accrue from a violation. Most importantly, citizens in the US can sue the polluters who violate their permits or government agencies that fail to implement the environmental laws by providing a notice for 60 days.

Under the Water Act, India also has same provisions but these are never effectively enforced. Another important move towards transparency is release of annual results of enforcement. Compliance history of the industry is published which can be accessed by everyone. Even regional level industry compliance history is available.

How Norway deals with polluters
Norway, with a population that is just one-third of that of Delhi, faces a different set of problems. Anne Marie Mo Ravik, senior advisor, Klif (Climate and Pollution Control Agency, Ministry of Environment, Norway), presented compliance and enforcement mechanism followed in her country. The biggest environmental challenge faced by Norway is import of pollution with ocean and sea current. To reduce the same, Norway has large number of bilateral agreements with different countries. Norway has three pieces of legislation to check pollution: the Pollution Control Act, the Product Control Act and the Greenhouse Gas Emission Trading Act. The key principles for environmental protection in Norway are: precautionary principle; polluter pays principle; substitution principle; recipient orientated/critical loads on nature; environmental management system; and preventing damage caused by pollution rather than repairing damage. Norway has adopted risk-based approach for effective enforcement of environmental laws in the country. Industrial plants/sites are divided into four risk categories which are determined by the hazard their emissions and discharges represent and the quality/sensitivity of the receiving environment. The inspection frequency plan in Norway is different. The inspection frequency in Sweden is based upon risk factor of industry—higher the risk factor, higher the frequency of inspection. Another criterion to decide inspection frequency is compliance history of the industry. In case industry has bad compliance history, frequency is higher than industry with good compliance history. A last criterion is area of high concern. Special focus is given to selected area where environmental load is on higher side.

Kenya’s burden
Gerphas Keyah Opondo Orina, chief enforcement officer of National Environment Management Authority (NEMA), Kenya, also made a presentation, highlighting Kenya’s approach. Kenya’s track record in enforcement of environmental law is no different from that of India. Kenya also faces similar problems like poverty, declining groundwater table, increased pollution and degradation of natural resources, and shortage of manpower to implement environmental code. Kenya has a system of joint monitoring along with police and customs officers, which has yielded some success. Overall, like India, Kenya needs to learn a lot in order to strengthen its compliance and enforcement mechanism.

Sweden’s effective regime
The most impressive presentation, as expected, was by the Swedish Environmental Protection Agency’s Ylva Reinhard. The best part of the Swedish environmental regime is that in addition to the county administrative boards (CABs) at the regional level, municipalities at the local level also work in tandem with them which is not the case in India. Like Norway, the job of SEPA revolves around environmental objectives set by the ministry of environment. This provides a clear roadmap to SEPA, CABs and municipalities to finalise their annual plan with a clear direction to meet the environmental objective.  SEPA has adopted a self-monitoring programme in Sweden where industry has to develop self-monitoring programme in consultation with SEPA. The industry is obliged to report to SEPA immediately if there is any deviation from monitoring programme or statutory norms. Penalties are heavy if non-compliance is not reported by industry.

Wake up call for Victoria EPA
John Merrit of Environmental Protection Authority,Victoria made a presentation on the measures taken in Australia for effective compliance and monitoring. He began his lecture with a case study from Victoria, which reported methane leak from a landfill site in one of its towns with a population of 700. People in the town dragged the authorities to court which imposed a fine of Australian $23.5 million, of which $10 million dollar was to be paid by EPA Victoria. It was a rude awakening for EPA Victoria. The incident prompted them to design a new strategy. The officials prepared a five-year plan which included information on how to deal with past pollution, tackling current environmental issues and shaping the environmental future. The other innovative step by EPA Victoria is training officers who are involved with compliance and enforcement. The authorised officers are trained on regulatory aspects, inter-personal skills and technical details before they are sent for inspection and monitoring.

What ails Indian SPCBs
The most revelatory and interesting presentation at the conference, however, was by D K Behera, senior environmental scientist with the Odisha State Pollution Control Board (OSPCB). Many senior officers from different SPCBs appeared unhappy with Behera’s tell-all talk. He boldly stated the inherent grey area in SPCBs: inadequate technical manpower; few technical members as compared to non-technical members; absence of criteria to calculate the minimum staff required by a board. What’s more, most SPCBs do not have full-time chairperson which hampers decision-making. On the other hand, there has been exponential increase in number of industries and environmental regulations. “That is why environmental performance monitoring has taken a back seat,” said Behera. He further added that because of shortage of manpower, OSPCB inspects targets very few industries (see table). At the end, he stressed on the need to have a standard operating procedure for inspection and monitoring for all SPCBs. The findings of the Behera were supported by Padam B Rastogi, director with the Union ministry of environment and forests. The presentations by other SPCBs only listed the achievements of their boards rather than discussing innovative measures adopted by them to improve compliance of industries in their jurisdiction.

What became clear at the end of the conference was the non-transparent way in which our state pollution control boards function. SPCBs here play a reactive role rather than being proactive. The SPCBs can make a beginning by uploading EIA reports, inspection reports, compliance reports, environmental statement reports and minutes and videos of public hearings on their websites to usher transparency. Like Sweden and Norway, they should also prepare list of objectives in the next five years and review status every six months. Many speakers in the conference referred to the West Bengal SPCB as the best SPCB in the country. WBPCB could, therefore, set a benchmark by ushering in changes in the wake of lessons learnt from the conference.

Catch Water Where It Falls - Toolkit on Urban Rainwater Harvesting

Economic and disease burden of dengue in Southeast Asia

Judgement of the National Green Tribunal on municipal waste management