Industrialisation in China and India started almost at the same time. But the rate of industrialisation in China was and is much higher than India because of their former policy ‘grow first, clean later.’  Nevertheless, our neighbours started cleaning up operation in the late twentieth century and have been aggressive in their approach towards environmental cleaning. They strengthened their environmental force, provided legal provisions to punish non-complying industries and devised innovative regulatory instruments. The article briefly summarises some of the best practices adopted by Chinese environmental administration.

Institutional framework in China
Chinese environmental administration is a multi-layered institutional structure with territorial divisions at the centre, province, city, county, township, and village levels. At the top, is the Ministry of Environmental Protection (MEP), a cabinet-level ministry of the Chinese Government. The primary role of MEP is to guide and coordinate major environmental problems at the regional and local levels, to formulate pollution reduction programmes and supervise the implementation and to manage environmental monitoring, statistics and information.

SEPA is at the national level. At regional level, there are a large number of organisations for implementing environmental policy at their respective region. According to an OECD report, there are 2000 Environmental Protection Bureaus (EPBs) with approximately 60,000 employees at the provisional, municipal, district and township administration level (see figure 1). The EPBs vary in size: an average provisional EPB employs 59 staff members with the lowest number of 29 in Qinghai and Tibet and highest of 102 in Tianjin. Some of the functions of EPBs are

The EPBs have a number of affiliated units through which it delivers its duties. Some of the important units are Environmental Monitoring Centre (responsible for ambient and emission monitoring), an inspection unit (responsible for enforcement and collecting emission charges) and a research institute (responsible for technical analysis and research). The monitoring and inspection of industrial facilities in China follows a precise procedure. Apart from regular inspection activities, complaints made by citizens regarding environmental incidents may raise field inspections. If the polluters are found at fault, various administrative penalties may then be imposed. These may also include pushing the polluter to install treatment facilities. In extreme cases, the plant may be ordered to cease and relocate its operations.

Regulatory instruments in China
Like India, China also has ambient standards and industry specific discharge/emissions standards. In addition, they also issue permits for discharge and emissions. This was done in late eighties when it was felt that though national effluent standards are met but quality of river, lakes and other surface water bodies were deteriorating because there were no constraint on the total mass of pollutants discharge into the water body. In response, SEPA introduced permit system. The industries are required to register with EPBs and apply for permit. In turn EPBs allocate allowable pollution loads to industry and issue discharge permits.

Chinese government has also increased public participation to improve local environmental enforcement and compliance. The most commonly used channel for public participation in environmental enforcement is the citizen complaints system. The complaints are predominantly lodged at local EPBs. Accepting and responding to citizen's complaints has become the priority of local EPBs. EPBs are required to take complaints 24 hours a day and many EPBs instituted a “rotation system” whereby entire staff of an EPB would rotate taking night shifts to answer phone calls. This has encouraged people participation in environmental governance. According to a USEPA study, the annual number of environmental complaints has increased from 111, 359 in 1991 to 687,409 in 2006 throughout the nation, an increase of about 620 per cent.

The court plays a very important role in China when administrative enforcement is insufficient or fails. It includes actions ranging from gaining court assistance in collecting pollution levies or fines to criminal sanctions for serious environmental degradation. Such assistance from court has enhanced EPBs regulatory power by generating deterrent effects on the regulated community.

To complement the regulatory system, economic instruments have been adopted to curtail environmental pollution from industries in China. Discharge fee is calculated based on the concentrations and types of the pollutants in the effluents. These are applied to industrial emissions covering discharges of wastewater, waste gases, solid waste, noise and low-level radioactive waste. Pollution levies are collected by local EPBs with jurisdiction and earmarked for environmental protection purposes.  The total emission fee charged in 2005 reached 12.32 billion CNY, which has increased significantly since 1995.

Figure 2 shows online air and water pollution monitoring system for Nanjing Municipal Environment Monitoring Center. For air monitoring, a Field Control Node (FCN) controller is installed in an environmental monitoring vehicle and connected to air quality analyzers and climate instruments. For waste water surveillance, a Field Control Junction (FCJ) controller is connected to a water analyzer. The collected data is sent to a server (3rd party) via a GPRS communications link. Environmental data is transmitted in real time via socket communications. Daily and weekly reports for environment management purposes are sent by FTP. 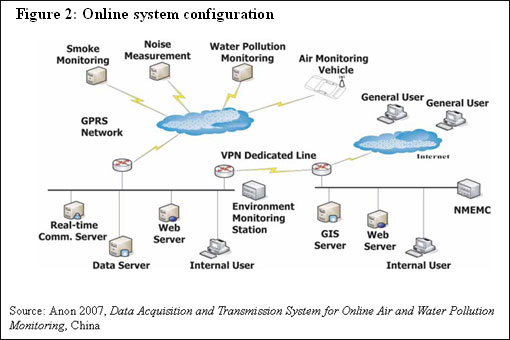 Lessons for India
There are some similarities in institutional framework between India and China but in terms of functions and responsibilities differences are huge. In India, we have Central Pollution Control Board (CPCB) and Ministry of Environment and Forests (MoEF) at the central level and State Pollution Control Boards (SPCBs) at regional level. Unlike China, environmental policies of MoEF and CPCB are nowhere reflected in the policies of other ministries and departments; say Ministry of Industries or Ministry of Coal. Ministry of Industries is interested in promoting industries or Ministry of Coal will push for coal mining in the country. These departments do not interact or engage with CPCB or MoEF on environmental issues or try to integrate their policy with policies of MoEF and CPCB. The regulatory agencies can take a cue from China and incorporate environmental provisions in Ministries and departments whose directives can have direct impacts on environment.

Environmental governance in our country is carried out by SPCBs at ground level.  Compliance assurance is based on whether industry is complying with emission or discharge standards. All the SPCBs in the country have serious shortage of manpower. In some of the states, each technical staff has to monitor a minimum of 150 industries in a year which has 280 days, which means approximately 2 days for each industry. It is however, practically impossible to travel, review past reports, collect and submit samples at laboratory, prepare report or file case against non-complying industry in just 2 days time, assuming the concerned staff has no other official obligation.  SPCBs in India need to be decentralised at municipal level to enable them to perform their job effectively and with purpose.

Some time back the Ministry of Environment and Forests in India declared 43 areas as critically polluted based upon a CEPI Index developed by IIT Delhi. Soon MoEF put a moratorium on new industries coming up in these critically polluted areas. But it was followed by huge protest by industries complaining why they should suffer for poor performance of other polluting industries. The ministry relented and asked state government to prepare action plan as a precondition for moratorium to be lifted. It said that the action plan should detail what action will be taken by industries to reduce pollution level. Many states submitted their action plan and in response MoEF lifted the moratorium from some of those states. However, an analysis of these action plans discloses the fact that either they are prepared poorly or are talking about technologies to reduce some kind of pollutants from some specific industries. Some of the states have complained that they do not have adequate competency to prepare such plans. Seeing, how effectively China has used load based standards to reduce overall load, such innovative steps can be included in action plans of the critically polluted areas. The purpose of asking boards to prepare action plan is to reduce the environmental load. But all the action plans have suggested new technologies to reduce environmental load. How much load will be reduced by implementing these technologies is not quantified and discussed in these action plans. Ministry of Environment and Forests can take a leaf out of environmental governnace in China and go for load based standards at least for critically polluted areas to achieve quantitative results once action plans are implemented.

MoEF drags feet over law for safe disposal of CFLs

MoEF's clearance must for mining minor minerals, too: Supreme Court

Green nod to Jindal mine nixed

River restoration is not just an ecological act