Taking a cue from the Acid Rain Programme of the United States, Ministry of Environment and Forests has initiated a pilot Emissions Trading Scheme (ETS) to abate air pollution and enhance environmental quality. It would allow the regulator to set a cap on the aggregate level of pollution permitted, and then allow a self regulating system to ensure that pollution does not exceed this cap. “The Emission Trading Scheme proposed by MoEF for Particulate Matter would be the first of its kind in the world” says Dr D Saha, Senior Scientist, Air Laboratory, Central Pollution Control Board. “The scheme is in its nascent stage and the results of pilot study would be used to determine its feasibility in other parts of the country” adds Dr Saha.

What is ETS for particulate matter?
Compliance to National Ambient Air Quality Standards 2009 (NAAQS) has been dismal in the country. The mean ambient concentration of particulates in India is much higher than the prescribed norms and is about five times that of the United States. India’s national average of 206.7µg/m3 of Suspended Particulate Matter (SPM) in 2007 was well above the old National Ambient Air Quality Standard (NAAQS) of 140µg/m3 (for residential areas). Most Indian cities exceed the current NAAQS of 60µg/m3 for Respirable Suspended Particulate Matter (RSPM). Average annual concentration of RSPM in the capital alone is about 120 µg/m3, as against 60 µg/m3 prescribed in the National Ambient Air Quality Standards and World Health Organization (WHO) guidelines of 20 µg/m3 (CPCB, 2006; WHO, 2008).  Also five of six cities covered in a recent report of CPCB (2011) exceeded the standard in all years 2000-2006. Keeping this in mind the regulatory bodies are targeting Particulate Matter emissions for ETS.

Emissions trading would encourage compliance and push polluters to pursue cost effective reduction strategies besides providing incentives to develop means by which emission can be reduced. The scheme works in a way such that the regulator sets an overall amount for pollution without deciding what any particular source will emit. Polluters face a price for their emission and choose how much to emit, within reasonable limits. The price of emissions makes pollution costly and gives polluters incentives to cut back. The scheme allows the regulator to set an overall emission level for a sector and allocate these emissions among units in the form of permits. At the end of each permit period regulators can check emissions against permit holdings to verify compliance. 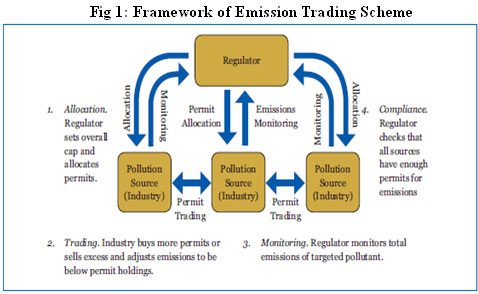 “The ETS would bring the emissions below the prescribed norms. The system however demands effort from both the regulatory bodies in terms of setting standards and industries in terms of compliance to the set standards” exerts Dr Saha. The system is a shift from the traditional Command and Control approach used in the country to reduce pollution.

Officials from MoEF informed that modalities are still sorted out on what will be the charge of permit, how will it be calculated, what are the provisions for penalty if any industry emits more than the prescribed permit. Dr Saha added that there is no law in the country which allows regulators to charge the industries for emissions. But SPCB can take to task the polluters by revoking their consents.

Pilot study in 3-states
The pilot scheme for enforcing caps on particulate emissions will be initiated in the states of Gujarat, Maharashtra and Tamil Nadu. Availability of accurate real time data is one of the pre requisites of the Emissions Trading System. Some industries in Tamil Nadu and Gujarat have installed ‘Continuous Emissions Monitoring System’ that measures and reports the total emissions from industry stacks throughout the year providing reliable and incessant data required by the ETS. Also Gujarat, Tamil Nadu and Maharashtra are chosen since they contain critically polluted areas with a cluster of industries which would facilitate greater trading and be suitable for the scheme. The scheme also referred to as Perform, Achieve and Trade is being tested in industrial belts of Gujarat, Maharashtra and Tamil Nadu. Gujarat has begun a survey of industries, their air pollution levels and their machinery at around 400 units in Sachin Industrial Cluster, Ahmedabad, Surat and Narol to implement the ETS.

Role of Continuous Emissions Monitoring System (CEMS)
ETS requires fair monitoring of total emissions which is acceptable to regulators, participating industries and public. Continuous Emission Monitoring System (CEMS) ensures effective measurement, recording and standardized reporting of specified air emissions and other parameters. CEMS is thus the most instrumental tool for implementing ETS. Installation of CEMS however might be expensive for industries but monitoring is accurate for a range of pollutants also it can be used in a number of industries such as power, steel, cement, chemical fertilisers and petrochemical, pharmaceuticals, boilers and incinerators, paper and several others. The accuracy and viability of CEMS in a range of industries makes it the most plausible option for Emission Trading Scheme. Tamil Nadu PCB is the first Board in the country to set up Continuous Emission Monitoring Station called the CARE Air Centre. TNPCB has already started collecting and collating real time emission data from as many as 47 industries and has the system in place to support trading. One issue that needs to be taken care of before implementation of CEMS is a common guideline with specification for calibration, CEMS type and results of different types of imported equipments to check for disparities and ensuring uniformity. An effort from TNPCB to develop and standardise a basic platform so that there are no discrepancies in the results has also been initiated.

Conclusion
The Emission Trading Scheme promises greater pollution abatement to achieve environmental goals. However, the structure on setting the cap, allocating permits and framing the rights and obligations of permit holders requires a number of legal and infrastructure interventions on the part of regulators. While it is not possible to draw conclusions about the efficiency of the proposed scheme a thorough study needs to be done to analyse the pros and cons and the extent of organizational changes that will be initiated by ETS. “Regulators are in the process of designing the system and a concrete framework will come up by the end of this year” concludes Saha.

MoEF drags feet over law for safe disposal of CFLs

MoEF's clearance must for mining minor minerals, too: Supreme Court

Green nod to Jindal mine nixed

River restoration is not just an ecological act