A Commentary on Consumption Rich Indians versus Rich (and Poor) Americans

IN OCTOBER 2015, Centre for Science and Environment (CSE) published a report titled Capitan America: US Climate Goals-A Reckoning.2 A central point of this report was that climate change inaction in the US was directly linked to its unfettered consumption of goods and services, that consumption is non-negotiable for the US and that it wants to ‘solve’ the climate puzzle without doing anything to change the status quo. It wants the ultimate win-win-to consume but not pollute. We concluded that this is not possible at least in the existing economic–technology–emissions paradigm and that the US would have to put constraints on the material-, energy- and emission-intensive lifestyle patterns of its citizens if it wants to contribute equitably in the fight against climate change. 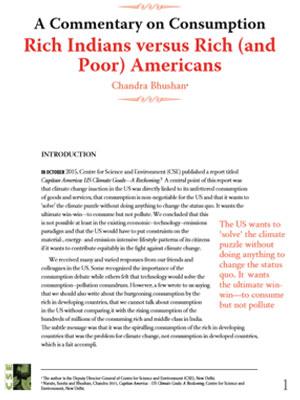