India is in the throes of an agrarian crisis. Indebtedness, crop failures, non-remunerative prices for crops and poor returns over cost of cultivation have led to distress in the farming sector. According to National Crime Record Bureau data, farmer suicides increased in 2015 by 41.7 per cent over 2014. Farmer suicides were attributed to causes such as indebtedness, crop failure and other farming-related issues. Farmer distress is likely to worsen by the increasing frequency and intensity of unseasonal and extreme weather events due to climate change.

Centre for Science and Environment (CSE) published in 2015 a report, Lived Anomaly: How to Enable Farmers in India to Cope with Extreme Weather Events. The report revealed that the existing relief and compensation mechanism for farmers against crop loss—which is ad hoc, chaotic and politicized—has failed to bring timely and adequate help to affected farmers. This study and subsequent consultation drew attention to the urgent need for financial safety nets for farmers to overcome vulnerabilities induced by frequent weather anomalies. A universal crop insurance mechanism, with various safeguards, was recommended as a key component of the safety net.

PMFBY is an improvement over NAIS and MNAIS and is designed to reduce the burden of crop insurance on farmers. The scheme came into operation from 1 April 2016 with a Central government budget allocation of Rs 5,500 crore for 2016–17. Further, the Central government plans to bring 40 per cent of agricultural area under PMFBY in 2017–18 and accordingly, a provision of Rs 9,000 crore has been made in the 2017–18 budget. 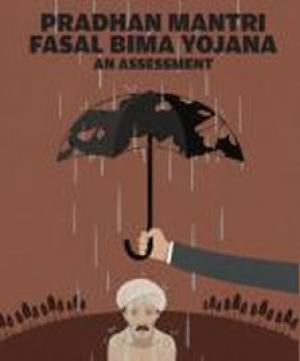