Questions validity of Plachimada tribunal bill under its consideration

The Plachimada tribunal bill that was making no progress at the Centre has received yet another setback. The Union home ministry, which was coordinating with other Central ministries—law, environment and forests, agriculture—for feedback on the bill, received legal opinion from the counsels of Hindustan Coca-Cola Beverages Pvt Ltd, questioning the validity of the bill that was passed by the Kerala legislature. 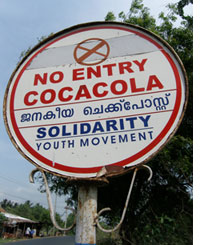 The Plachimada Coca-Cola Victims’ Relief and Compensation Claims Special Tribunal Bill, 2011 was to adjudicate disputes relating to compensation of Rs 216.25 crore to be paid by the company for the damage its cola bottling plant caused in Plachimada village in Palakkad district. The bill was passed unanimously, on February 24, by the state just before the Kerala Assembly was dissolved for elections.

The bill has been returned to the state and based on the legal opinion of Coca Cola, the union home ministry has demanded an explanation for it. "According to our information, the counsels for Coca-Cola had sent a letter to the President's office as well and had requested her not to sign the bill. They have been calling the bill unlawful," says KV Biju, convener of the Plachimada Struggle Solidarity Committee, a people's front fighting for the rights of the residents of the village who suffered health problems and agricultural losses because of the cola company over-exploiting groundwater and discharging pollutants.

Former chief minister of Kerala and opposition leader, V S Achuthanandan reacted sharply to the news. "This is a planned conspiracy of the Centre against the bill. This is an anti-people decision and the Centre is trying to sabotage it...the Central government is playing the role of Coca-Cola's postman," he said.

The company had in the past expressed its disappointment calling the process of passing the bill flawed. "This bill is devoid of facts, scientific data or any input from or consideration given to Hindustan Coca-Cola Beverages Pvt Ltd (HCCB). At no time, was HCCB offered an opportunity to present facts, engage in dialogue around this issue or share independent data before the bill was tabled or approved," was the official response of the company when the bill was passed by the state legislative assembly.

According to S Faizi, member of the Plachimada high power committee, which indicted  Coca-Cola, the company has been writing to all the ministries concerned about their two point contention, which is that the state does not have the power to make laws relating Union subjects and that with the national green tribunal coming into force such a bill was unlawful.

"The bill is not unlawful. It deals with state subjects like agriculture, health, water and animal husbandry and one concurrent subject that is labour laws, and hence it has the  power to pass the bill. Secondly, the national green tribunal will take up cases that are not more than five years old. The tribunal came into being in 2010 while the Coca-Ccola unit at Plachimada was shut down in 2004; so it falls beyond the purview of the national green tribunal. The Plachimada tribunal bill is the only way to compensate the  victims," says Faizi.

The state finance and law minister KM Mani, who was also, incidentally, the only MLA to have opposed the bill then, was unavailable for comments since he was travelling abroad. However his officials have said, on the condition of anonymity, that since the decision was taken in the legislation, the present government is going to back it completely.