The proposed project is the development of a Multi product special economical zone (MPSEZ) and a Domestic Tariff Area (DTA) proposed by M/s Sri City Pvt. Limited, Mr. Ravi Kanth from Hyderabad based NGO called Prakriti on behalf of the local communities of Andhra Pradesh has requested Centre for Science and Environment (CSE) to technically evaluate the Environmental Impact Assessment (EIA) document of:

1. Development of a Multi product special economical zone (MPSEZ) and a Domestic Tariff Area (DTA) in an area of 2185 ha.

M/s Sri city (p) Ltd., is developing a SEZ and DTA Multi product special economical zone (MPSEZ) and a Domestic Tariff Area (DTA) in an area of 2185 ha at Chittoor district near Tada, Andhra Pradesh. It will be housing industrial units like auto components, light engineering, electrical and electronic goods, garment and leather industries, gems and jewellery, IT/ITeS/BPO etc along with residential townships and commercial units.

Project location: The proposed project of MPSEZ and DTA developed by M/s Sri city Pvt. Ltd., is situated at Satyavedu & Varadaiahpalem Mandala. Chittoor district, Andhra Pradesh. The site is approximately 65 Km from Chennai on NH-5 within the boundary of Andhra Pradesh. The Ennore port is about 40 Km from the site and closet railway station in Tada at a distance of 1 Km.

Bring Andhra Pradesh on the global map as an attractive destination for manufacturing and logistics facilities. Such a development would contribute to revenue generation in the state as well as provide employment opportunities.

1. Cumulative Impact: The SRI city is planning for industrial development. However there are already other industries located in the nearby areas. Page 55 of the report states that the surrounding industries in the area comprise of sugar factories, granite cutting, chemical industries, textile industries and various other industries. The report fails to give the current depiction of pollution in the area, overall impact of these industries on the environment is completely missing. The project would only add to the worsening of condition. The EIA speaks as an individual project basis, which would not suffice to predict or mitigate the impact on the environment that is already deteriorated. Such an important environmental concern cannot be neglected for an industry to starts its expansion project, which would only add on to the existing pollution. The report also fails to predict cumulative impact of these industries on air, water, land, soil and the surrounding community.

2. The site is located near to Pulicat Lake. However the report does not talk about the lake or its sensitive flora and fauna. Nor does it give any conservation plan to avoid any harm to this fragile ecosystem. The report fails to assess the impact of construction as well as operation phase impact on the lake due to various factors that would harm the lake as well as the ecosystem of the lake. Pulicat Lake is known to be feeding and breading ground for both aquatic and terrestrial birds. Being a highly sensitive area, the impact of construction as well impact when this SRI city starts functioning would be high but this is not being focused in the report.

5. The loading and unloading areas for the raw material are not clearly mentioned whether open or closed. This would give rise to dust and air pollution. This has to be closed in order to decrease the air pollution in the nearby areas and hazards that it might cause due to the dust to the flora and fauna during the construction phase in the nearby areas. Maximum amount of air pollution is generated in handling of raw material. This would create a nuisance for the nearby local people. This impact has to be mitigated using proper measure like covering the area. Loading and unloading mechanism has to be automated to the extent possible. During construction phase, huge amount of dust will be generated. This would have severe impact on the close by bio diversity; close by areas specially the Pulicat Lake as well as people residing in the nearby villages. Sprinkling of water is inadequate in terms of mitigation measure that is being proposed by the project proponent. Proper care with respect to air pollution during the construction phase has to be taken which the report fails to address. Solid waste generated during the construction phase is also not managed properly according to the report.

Solid waste during the operation phase is to be sent to landfill site however the site is not specified in the report. Mere mention of the final disposal point is inadequate seeing the scale of the project. Hazardous waste management for the locality is also inadequate. 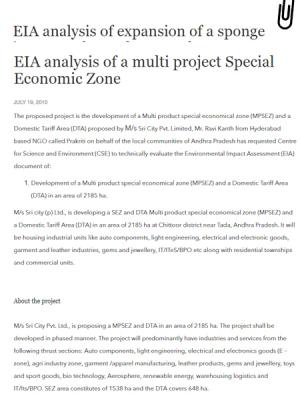