The proposed coal bed methane (CBM) project extend over an area of 634 sq km in the Raigarh and Korba districts. Arrow energy, Australian based company along with consortium partners GAL (India) and Swedish infracture company EIG (Energy infrastructure group) have been awarded to explore methane in the Mand Raigarh Block (MR-CBM-2005/III) at Chattigarh.

The draft EIA report, prepared by New Delhi-based Asian Consulting Engineers Private Limited Pvt Ltd. is for a proposed greenfield site. The proposed site for exploration is not in use for coal mining. EIA report states that  the total 8 holes will be drilled to estimate the gas availability. Depending on the gas availability, the production wells will be located.  The Terms of Reference (TORs) for the EIA report set by the union Ministry of Environment and Forests (MoEF) on the basis of proposal submitted by Arrow Energy (India) Pvt Ltd.

The “Term of reference” given by the ministry clearly states that the proposed project will identify potential impacts on various physical, social and biological environment and try to mitigate by possible means but prepared EIA report failed to address significant issues such impact of CBM extraction on local and regional hydrology due to extraction of high quantity of water, impact of polluted water (CBM extracted water) on forest, agricultures, water bodies and on biodiversity. Moreover EIA has violated Term of Reference (TOR) – Point number 6 of TOR states that EIA report should include “Statistical data on the accident occurred due to CBM exploration”. However, the report failed to incorporate such Statistical data on the accident.

All above clearly shows that the TOR given by the MOEF was not adequately followed and EIA report has highlighted only those issues, which are not very significant and failed to capture bigger issues. It could also be anticipated that once the exploration wells indicate the presence of methane on commercial scale then impact of production wells on hydrology, agriculture and biodiversity would be far high - which was not at all assessed in the EIA report. The report also failed to provide information on fragmentation of the wildlife habitat due to construction of pipeline, road construction and storage of methane and disposal of high salt containing CBM water. Further, the social profile of the area is evaluated based on the secondary data (census 2001), which are again a poor criteria.

Misleading information on land use pattern.

Executive Summary of the EIA (which is in English) provided to the local community prior to the public hearing - In which project developer has provided misleading information on land use pattern (See page 4-10, table 3 of executive summary) which differ entirely from the EIA report (see page 4-6, table 4.3). According to executive summary, forest area (dense vegetation) constitute 8 % of the total land whereas EIA states 33.63% (see table 1 information provided in Executive summary on land use pattern, table 2 information provided in the EIA report on land use pattern). Moreover, fique on water body is contradictory (see table 1 and table 2) for instance executive summary says “water body in project area constitues 0.2 % of total land but in EIA report it is mentioned 6.62 %).Therefore, it is clear that an EIA report for a proposed project try to hide some basis ground reality from the people on the landuse pattern or there may be the probability of copy and paste jobs of another similar type of project.

Table 1:  Information provided in Executive summary on land use pattern

Table 2 : Information provided in the EIA report on land use pattern

Misleading information on well depth - Executive summary states depth of each well varies from 200 m - 1000 m below the ground level. However EIA report says the well depth will be 600 to 800 meter. This is a clear indication of carelessness and lack of environmental sensitivity.

The proposed project is planned to dig 8 core hole and five productions well as it is mentioned in the executive summary, however in the EIA report at none of the place they have mentioned about the production well. Moreover, the both executive summary and EIA report failed to earmarked the location of the holes. This is important because, large part of the exploration area is under forest.

Around 59 % of the total land of proposed project is forest land, inspite of above, biodiversity assessment was undertaken very leniently and provided misleading information for instance, according to the EIA report, only wild animals found in the study area includes bear, hyena, monkey, leopard, fox and jackel and EIA report concluded that, “no rare and endangered animals species are found” (see 4.7.3.1, page4-18). However, out of above listed animals both leopard and bear fall in schedule 1 – it means animals are under threat and need immediate protection further leopard has been declared as rare and endangered animals.

According to R.K Singh, 2002, “A Rapid Assessment of the Human–Elephant Conflict in Chhattisgarh” report indicated that the places like Jashpur, Pathalgaon and Hamirpur are the areas where conflict between human and elephants hvae been reported. It clearly shows these areas are corridor for elephants however EIA report claimed “ no corridor of wildlife movement or routes of migration has been reported” Report enclosed.

Methane extraction involves extraction of large quantity of water. The main issue with water quality is the amount of total dissolved solids (TDS), consisting of sodium, calcium, magnesium, ammonia, selenium, boron, iron, radium, fluoride and various metals. However EIA report failed to provide information on quantity and quality of CBM water. According to one published literature - In the Powder River Basin the majority of CBM wells produce water with less than 5,000 mg/l total dissolved solids. It clearly indicates CBM water has high salt content. Further salt level increase with the increase in the depth of the well. However EIA report is completely silent on CBM water characteristic.

The presence of high sodium levels CBM discharged water is unsuitable for irrigation. Increased sodium bicarbonate levels in water are lethal to fish and all aquatic and riparian vegetation. EIA report is completely silent on impacts of production well on environment. Lot of research indicate that high salt containing water could potentially have a negative effect on the vegetation and aquatic organisms existing in the river/lake/pond ecosystem. Moreover, salts accumulate in the root zone and affect crop growth. Further Sodium content in the CBM water can also impact the soil physical properties by inducing calcium, potassium, and magnesium deficiencies. It has also being indicated that sodium in CBM water pose a more troublesome problem to soils which contains more than 30% clay. There may be also a risk of replacement of salt intolerant species with more salt tolerant species or encroachment of halophytic weed species. Hence it seems that EIA report is failed in assessing the impact of CBM water on local biodiversity and water bodies.

EIA report without giving scientific explanation concluded that “water produced from the wells can be suitably used for the local community and this will be of great help to this area, pp5-9”. However, different literature indicates that CBM water due to its saline nature and other constituent like fluoride and heavy metal pose risk to agriculture, fisheries, water body, plant and animals. Moreover EIA report is silent on characteristic and impact on CBM water on environment.

Impact on hydrology: This project is expected to cause high impact on hydrology once the wells began to produce methane on commercial scale. However EIA report failed to capture the impact on local and regional hydrology. The methane extraction process involves taking out large volumes of water from the aquifer. According to the Montana Bureau of Mines and Geology, monitoring and groundwater modeling indicates such wells are difficult to recharge and takes 20 years to recharge. In coal mining areas, recharge occurs within a few years (typically 3 to 4). However, open pit or strip coal mines (surface mining )the impact area is extend to only a few square miles, and because the area of impact is relatively small, recharge can occur rapidly. With CBM extraction, the area of impact is very big may be as large as many adjacent townships (1 township=9324 hectare). Hence EIA report failed to quantify such impact once they starts producing methane on large scale.

EIA report failed to assess the impact on groundwater quality and quantity - Literature indicate that CBM extraction has huge impact on ground water table for instance in the Powder River and San Juan Basins, water level near coalbed methane development has dropped as water has been removed from coal beds during the extraction. Artesian wells that tap into coal beds have also disappeared. Some families had to drill deeper water wells to maintain a steady supply of water. Monitoring wells maintained by the federal Bureau of Land Management (BLM) in the Powder River Basin have indicated a drop in the aquifer of over 200 feet.

Case study CBM has detoriated groundwater quality: In the Raton Basin, Colorado Oil and gas Conservation commission (COGCC) had undertaken an underground water quality assessment of 100 domestic wells around the CBM wells, result was astonishing, in the basin around 45% of the domestic well which supplies drinking water contain elevated concentrations of at least one or more common dissolved constituents (e.g. sulfate, nitrate, total iron and manganese, total dissolved solids) that exceed primary drinking water standards. Therefore, research and literature clearly indicate that CBM extraction has high impact on water quality. However, EIA has only generated the baseline data on water quality and failed to assess the impact of CBM extraction on local ground water quality. Further direct discharge of discharge CBM water has high potential to contaminate underground aquifers and local streams and rivers.

High sodium in CBM water affects the plant growth and agricultural productivity – However, EIA report failed to give information on CBM water quality. According to one literature, SAR (sodium absorption ratio) in the CBM water is around 31 (see table 4). Because of no information in the EIA report, if we consider above figure (i.e. 31) then a limit on sodium absorption ratio (SAR) is high against fixed standard (i.e. 26) by the state board and the central board on effluent disposal applied on land. Moreover, SAR above 26 is considered bad for the crop see table 3: Irrigation limit. It clearly shows that CBM water is bad for the agriculture and existing forest, however EIA has failed to assess these impacts.

Risk assessment and disaster management: Risk assessment and disaster management plant is an important aspect particularly in case of gas, which is flammable and explosive. As methane possesses flammable and explosive characteristic, this assessment become more important especially when majority of land is under forest and occupied by human habitation. EIA report has failed to assess the risk and disaster associated with storage of methane and pipelines once the well starts producing methane on commercial scale. EIA report had discussed risk associated with exploration, which do not have major impact on environment. This clearly shows that the EIA has failed to capture significant impact associated with methane exploration and production. 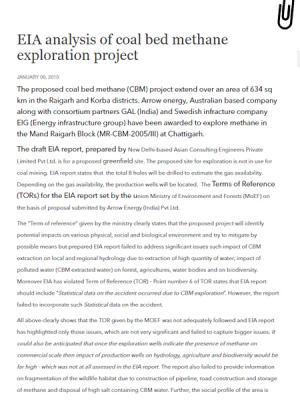