Expansion of Mine lease in Gare IV/1 is being proposed by Jindal Steel and Power Limited. Ekta Parishad on behalf of the local communities of Raigarh district of Chattisgarh requested us to technically evaluate the Environmental Impact Assessment (EIA) document of  Gare IV/1 Coal Mine Extension project at Village Nagarmuda, Janjgir, Tapranga, Dongamauha, Dhaurabhanta and Aamgaon in Tehsi; Gharghoda, District Raigarh of Chattisgarh.

Jindal Steel & Power (JSPL), a private sector company with interest in iron and steel manufacturing, is doing coal mining in Gare IV/1 coal block, captive to the JSPL plant in Raigarh, Chattisgarh. The Gare sector is located in Gharghoda tehsil of Raigarh district of Chattisgarh State. Sub block IV/1 is in the south eastern part of Mand Raigarh Coal field.

Project location: The mining lease area at present is 705.556 ha which will be extended to 978.654 ha by acquiring additional area from Dongamahua, Tapranga, Janjgir, Nagarmuda, Dhaurabhanta and Aamgaon in Ghargoda tehsil, Raigarh District.. The washery is being expanded from 2.4 to 3.2 MTPA and a coal dryer (2 X 200) is proposed for installation.

The present project is for increase in mine lease with same production capacity i.e., 6MTPA for which Ministry of Environment and Forests had given permission for three years according to approved mine plan by Ministry of coal, GOI to meet the increased requirement of sponge iron plant to which this coal block is captive.

· Expand the current mine lease area with same capacity i.e., 6 MTPA, to be supplied to Jindal teel plant and Power plant.

The Report shows the location of other coal reserves in the nearby area, i.e., Gare IV/2, 3, Gare IV/4, Jamkhani coal block and Bijahan coal block in its annexure (R & R Plan in Figure 1, Page no 3 in Annexure section). This shows that the coal reserves are getting mined and further would be mined.  A cumulative impact on the environment due to the present mines and upcoming mines has been neglected and overseen by the report. This is necessary to estimate the pollution load and load on the natural resources due to upcoming mines in the Area. Raigarh is already known to be exploited due to the present state of mining and other industrial units. Regional analysis has not been taken into account. There are lot of reserve forests and protecte4d forest along these coal reserves which would be harmed by the mining.

1. Impact of mining on Flora and Fauna:

The EIA report states that the Reserve Forest is located in close vicinity of the expanded Mine lease area, 600m , and consists of Schedule I animals like leopard, sloth bears, monitor lizard etc. The impact of mining on these animals would be very high Inspite of all the conservation measure which would be taken.

The report gives a detailed Wild life conservation plan. This Wildlife Management Plan seems to be very subjective because there is no timeframe and budget allocation nor responsibility for the same.

The Conservational Plan is also subjective in nature because the project proponent have not listed the number of schedule -I animals such as sloth bears, leopard etc. Although the area is ecologically sensitive in nature, fauna assessment in the report is based on secondary information. Seeing the sensitivity of the area, assessment based on secondary information is considered a poor practice in EIA. A comprehensive study regarding the existing animals belonging to Schedule 1 in the region is required.

There are number of Protected and reserved forest in the buffer area, which accounts to be 35.91%.  Mining would also impact these forest lands due to their close proximity to the area. The present condition of this forest land would have to be evaluated as mining is already taking place and further expansion would only worsen the case. The EIA report fails to assess this impact on forest land.  Lot of mining is still to come up in the nearby area. Cumulative impact such as loss of habitat, poaching, conflicts between wildlife and humans would increase considerably. However EIA has discussed its own project issues but fails to capture the overall impact on the ecology.

2. Impact of over burden:

The project states that after expansion the project will approximately generate 94.82 Mcum (page no 4-27) of over burden which is proposed to be stored in open dumps at various locations. The dumps are usually source of fugitive dust emission and lead to more problems in the surrounding areas. The EIA states that it has planted bushes, grass and trees to curb the soil erosion Inspite of all the necessary conservation measures, the external dumps would likely to impact the flora and fauna in the mine lease area as well as surrounding area due to the dust emission

The average rainfall of the area is 1270 mm. The result would be high siltation. This would increase the silting of Bendra Nala passing through ML area block IV/1. Also there are number of other nalas and two major rivers flowing near the site. These dumps would be causing high siltation in the water bodies.

Some of the Over burdens are placed near the forest area and water bodies. This would increase the risk on flora and fauna and the water body The EIA completely fails to recognize the impact of these over burdens till the backfilling is completed on the surrounding areas.

Mine seepage of about 1120 KLD. This mine seepage is proposed to be used in mining activities. However a inclusive plan discussing the usage of this seepage is not found in the report. The amount mine seepage generated by this activity is huge and its disposal as well as reuse has to be planned which the EIA fails.

The report state that two locations namely Dhaurabhanta and Dongamauha has change in trend line, in water table. (pg 4 -10) However the report abruptly state that no major change in water table is expected due to the mining. Expansion in area would only increase the fluctuation in the water table and the quality of ground water may be of inferior quality. This might also be the result of rapid movement of ground water from the mines contaminating the same. Such occurrence cannot be ruled out  The EIA fails to assess the impact of this change in ground water table on the people residing in these two villages and also fails to give proper mitigation measures for the same.  The EIA report does not give the water quality of these two villages, bore wells, it gives just the cumulative test of all the samples on the basis of which judgement cannot be made.

Expansion project is likely to bring significant impact on the existing roads as the mode of transport for the coal is by trucks. This will also affect the local inhabitants residing along the road and there would be increase in accident. The report has to have a enclosure of accident records in the area which the report fails to notice accident as an important impact of mining on the local inhabitants as well as the animals. The present mining would have impacted the roads and other infrastructure. The report claims to be having no impact on the road. However, this fact is not justifies, as the overburden and topsoil has to be moved to and fro after excavation and for backfilling. Also the coal excavated has to be supplied to the nearby JSPL. The report’s claim that there would be no increase in traffic, which is not justified

The report states that 95 villages have been identified in the buffer zone. However the report fails to assess the impact of draw down from the mine on this population. Total population residing in these villages accounts to be 67360 people. Also the villages located near to the mine lease area (villages within 1 or 2 Km from the ML) are more vulnerable to the draw down, this impact has been neglected by the report.

The Resettlement and rehabilitation plan has been given in the report; however site for relocation is still finalized and marked. Tapranga is still not finalized as relocation site. This leads to increase the dilemma of the people who would get displaced. This would augment the insecurity amongst the project affected people. Thus site has to be identified for resettlement for the displaced people which accounts for 113 households with total population being displaced of about 514 people.

As reported by EIA, Kelo river is flowing at a distance of 3.5 Km from the ML, Bhendra Nala passing through the ML area. The tributaries of Kelo river like Bendra nala, Dumer nala, Koledega nala, Chini nala etc are located near to the ML. Pajhar nadi id another perennial surface water body in the western side of the study area. Inspite of presence of number of water bodies in the area, EIA fails to assess the impact of mining on the water bodies. This mining would lead to high siltation risk to the water bodies which has not been discussed in the report.

The report states that the general gradient is towards Kelo river (pg no 3 -1), Mining would have impact on this river which has not been assessed and proper mitigation measures are not given in the report to protect the water bodies from the impact of mining.

Impact of change in the meander of Bendra nala is said to be not affecting the people residing in downstream in terms of quality and quantity but is not justified in the report. However, such an impact on diverting a nala would always be envisaged. Also due to mining the flow in the nala would not exist due to the impact of cone of depression. This is an important impact on the nala which needs to be discussed and mitigated.

One of the potential impacts of deep open-cast coal mining is the increase of toxic constituents in the water body, when a mine is converted into a water reservoir. This is caused as a result of continuous exposure and weathering of pit wall rocks and geo-chemical changes upon groundwater rebound – resulting into release of acidity and heavy metals. Filled water in mine voids behaves like an artificial lake, and limnologically, filled mine voids or natural lakes are quantified by the term Relative Depth (DR), which is expressed as: DR = 100 (Zm/d) where, Zm is the maximum depth of void converted to water reservoir and ‘d’ is diameter of the pit lake. For natural lakes,

DR is usually less than 5 per cent, whereas for a mine pit lake, DR should be in the range of 10 to 40 per cent.

The high value of DR triggers higher rate of evaporation loss and contributes to density stratification or meromictic condition (a state in which a lake’s water is permanently stratified and therefore, does not circulate completely throughout the lake at any time during the year) (Boehrer, 2006). This leads to the release of heavy metals and an acidic condition. In order to avoid meromictic condition and water pollution in the post-mining period, it is important that mine pits are designed optimally at the planning stage. Ideally, the depth of a mine should be reduced and restricted to a maximum of 30 meters by filling the bottom part with overburden followed by providing a gentle slope on all sides of the mine for user safety. 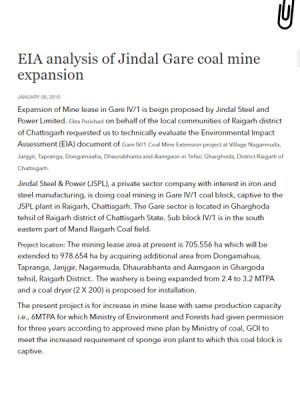