A representative from Ekta Parishad, a non-governmental organisation (NGO) working in the state of Chattisgarh on various social and environmental issues requested us on behalf of the local communities and NGOs of Kashipur Block in Raygada district of Orissa to technically evaluate the Environmental Impact Assessment (EIA) document of  M/s Visa Steel Limited proposing a Greenfield Integrated Steel plant near Kotarlia, Kotmar and Patrapali villages, Raigarh district of Chattisgarh state.

The above mentioned EIA report is proposed for set up of Greenfield 2.5 Million Tons per Annum (MTPA) integrated Steel Plant and 559 MW Captive Power Plant.

About the project
M/s VISA Steel Limited is the Indian flagship company of VISA Group having turnover of Rs. 4000 Crores at present. M/s VISA Steel is in the Iron and Steel Sector for the last eight years. M/s VSL have spreaded over their business across India, China, Australia, Indonesia, Switzerland, UK and Hong Kong.

Project location: M/s Visa Steel Limited (VISA) proposes to set up a Greenfield 2.5 Million Tons Per Annum (MTPA) Integrated Steel Plant and 559 MW Captive Power Plant near Kotarlia, Kotmar and Patrapali villages, District Raigarh in Chhattisgarh State. About 400 hectares land has been identified for the project. The site is on the east of Raigarh town and north of Kotarlia railway station.

The unit proposed in the project is:

Technical Report
There are several drawbacks in the quality of the EIA report. The report not only contains factual mistakes but is also poor in terms of assessing the impacts of the project on the environment. Some of these drawbacks/lapses are presented below:

1. Impact on Ambient Air Quality: The project is an integrated steel plant consisting of various units as mentioned above. The report states the air quality and emission control of individual unit to be controlled according to the guideline. However the report does not consider that the plant overall will impact the ambient air to a very large extent and has not discussed the overall impact of the integrated plant on the ambient air in the nearby areas.  All the units though having their emissions in limits, all together will contribute to a very large extent to the air quality deterioration in the area.

The report state that there are big industries in the study area (page no. 7) However it does not focus on the cumulative impact of all these industries on the ambient air quality of the area due to the present industries and other industries which will come up in near future. This is a very important impact for an industrial area which has been neglected by the report. The people residing in the near by areas would be highly affected due to these industries which cannot be neglected. The report does not give any details regarding people staying in the nearby areas who will be affected most due to the air pollution created by the plant and existing air pollution. Hence the report shows its inadequacy in assessing its impacts on the environment.

2. Impact on water bodies: With respect to water bodies, Sapnai river is the nearest river to the site, located at a distance of 1 Km and Kelo river at distance of 7 – 8 Km from the site. (Page no. 7). Conservation measures are being taken but still the activities in the plant would definitely impact the water bodies. The report does not state any impact on the rivers due to the upcoming project.

Another important lacuna of the report is that the report does state that the water usage of the project is up to 3350 Kl/hour and will be sourced from Sapnai river. However it fails to capture the impact of drawing such huge amount of water on the other users. River flow details are not given in the report nor does the report talk about other competing users of the river water and impact on these users due to huge withdrawal amounts.

Water balance of the water in the river is discussed in the report. (page no, 22) The report claims that water will be recycled and reused but this is subjective in nature. Wastewater generated is specified but particular usage of this wastewater is not specified. The water reuse and recycle is hazy in the report since the exact usage of the wastewater in terms of quality is not specified.

3. Impact on water quality: Analysis of surface water has been by the project proponent. The results are shown in Table 3.12 (page no. 82). However the EIA report states that water quality of ponds is contaminated and correlates this to animal bathing due to higher bacterial contamination. But it fails to emphasise on the pond water quality (sample SW5, SW6, SE7 and SW8) also ahs high conductivity and turbidity which might be due to the pollution of other industries already located in the area. The upcoming industry would be adding to this pollution level the possibility of which cannot be ruled out. The pond water being stagnant could not have self purified while the river water being in flowing condition does not contain the pollutant quantity at such higher level. The report also does not state the usage of this pond water by the villager, i.e., how it is used and how many people are dependent on it. Nor does it anticipate any impact on this water due to the upcoming project and associated impact on the people living in the nearby areas.

5. Impact on forest land: The report shows inconsistency in data regarding forest land. “The proposed site involves no forestland” (page no 12) and “out of 766.39 acres, 248.956 acres land comes under revenue forest land” (page no 20) are all together different statements in the EIA for the land acquired.

The EIA report has not performed a primary survey of the flora and fauna present in the area. Seeing the sensitivity of the area, depending on the secondary data and stating no impact on the flora and fauna due to the project is a drawback of the report.  The report also states the presence of bison, sloth bear, Mouse deer, Elephant and other (page no. 92). But it does not give nay conservation plan for the same and does not show any impact on these fauna which belong to vulnerable species. Some of these animals belong to Schedule I animal. The EIA does not state the impact on other forests area in the nearby areas which by the emissions form the plant.

6. Overall impact on the environment due to existing and upcoming industries: The report states presence of around 28 industries within 25 Km of the proposed project site (Page no. 94). Majority of these industries belong to sponge iron and steel industries which are highly polluting industries (belong to red category). The report fails to give the current depiction of pollution in the area, over all impact of these industries on the environment is completely missing. The project would only add to the worsening of condition. How much ever conservation methods are practices, environment would be damaged due to presence of large number of polluting units in the area which the EIA fails to notice and give preventive measure. The EIA speaks as an individual project basis which would not suffice to predict or mitigate the impact on the environment which is already deteriorated.

7. Impact on landform: Report claims that there would be no impact on land form due to the construction, excavation and earthworks that would be undertaken in the site which comprises of an area of 400 acres. (page no 97). However quantity of earth that would be excavated, depth to which it will be excavated is not specified. Hence the impact prediction is not justified and the statement that no earth will be brought from outside or disposed is subjective in nature as proper plan for the same is missing.

9. Improper planning with respect to mitigation plan: The report states that rainwater harvesting structures will be prepared by the project proponent (Page no 108). However, it does not specify the number of structure nor does it give the exact location and capacity that would help in recharging the groundwater. Proper plan has to be submitted for the same which seems to be subjective in nature without exact mention of various components that are required for recharging the ground water.

The report states that freshwater consumption should be directly measured and recorded regularly at every significant usage point (page no.178) but is not supported by a proper plan and schedule as well as responsible persons for the same are not mentioned in the report.

The report also mentions about Corporate Social Responsibility that the project proponent is taking up. However inadequacy in planning for the same with respect to the budget allocated for the same, plans to be executed, time frame, responsible persons makes it subjective in nature.

The project would bring significant increase in the vehicular traffic which would be used for catering to the transportation of some raw material. The report fails to predict the impact of increase in number of heavy vehicles on the road and emission due tot eh same on surrounding environment and habitat. Measures that are specified in the report to be taken are inadequate since the volume of traffic would increase tremendously.

10.   Raw material storage: Cooking coal is transported from china/Australia. Total requirement for coal is 10,80,000 lac t/year  (page no 26) which accounts to be huge quantity. Other raw materials along with this would be kept in open storage areas till it reaches the plant. Such quantity would generate huge amount of Fugitive dust and spraying of water is not adequate to control this dust. Hence the storage area should be covered.

The report also says that many people will be migrating to this place during the operation phase after the plant starts its operation. The report does state that demographic profile of the area will undergo significant change (page no 114). However the EIA fails to predict the impact of this migration on the local community which is an important impact. The local resources would be affected. This impact cannot be neglected when s big project is being setup in a rural area. 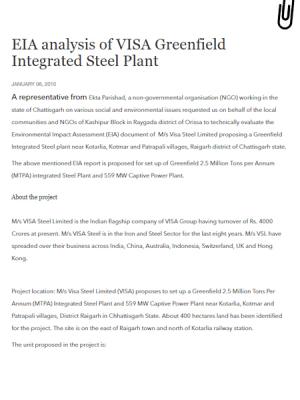