Supreme Court allows exports; sets out to chalk out disposal plans for the rest of the unused stock

The Supreme Court, on September 30, allowed exports of 1090.596 metric tonnes (MT) of unused endosulfan for which export orders were received. But it has reiterated its earlier order, banning the use, sale and production of the pesticide. The decision on the remaining unused endosulfan is yet to be taken. The manufacturers, on October 10, asked for an extension of another 4 weeks to file a startegy of disposing off the unused stock. The Court will meet again on November 11. 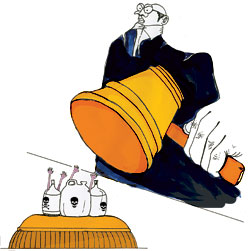 However on the exports, the court made it clear that the manufacturers would have to take all the precaution in packaging the banned pesticides so that it can be safely taken to the port without contaminating the surroundings. The three judge bench also stressed that the manufacturers should adhere to all the rules followed by the countries endosulfan is being exported to. Chief justice SH Kapadia said that the company will be held responsible if the pesticide finds its way back into the country.

The bench also asked the manufacturers to get a certificate of registration from the competent authority before actual export of material. Also, packaging will be guided by rule 35 of the Insecticides Act (Rules) of 1971 and will be carried out under the supervision of officers of the customs commissioner, officers of the Central Insecticides Board and an officer of the state environment ministry. Moreover, after proper packaging, the manufacturer will forward the consignment to the concerned port from where it will be exported in accordance with the Insecticides Act (Rules). Custom officers would have to check that there is no tampering with the seal put at the place of manufacturing.

While the court has imposed the ban and is trying to ensure that all precautionary steps are taken, the state agirculture authorities donot seem to be bothered. Reports from Punjab and Orissa reveal that endosulfan is still being sold in the shops- some places clandestinely while in others openly.

Why export were allowed

'The industry has no experience of disposing pesticides and the Ministry of Environment and Forest have not provided any definite procedure for the purpose'- This was the reply of the Supreme Court appointed joint committee on endosulfan. The reply was furnished in the second week of September.

The committee, jointly headed by the director general of Indian Council of Medical Research and the agriculture commissioner, has submitted its interim report on the best way to dispose the available stock of endosulfan in light of the ban on the manufacture, sale, use and export of pesticides. And the report suggestED exports.

The interim joint committee report had included inputs from both the ICMR and Agriculture department but the latter seemed to influence more. ICMR acknowledged that health impacts of endosulfan was higher in affected areas. But the agriculture commissioner's input said that no states other than Kerala and Karnataka had reported adverse impact and blamed the unscientific use rather than the pesticide itself.

But here was the best part. The Contradiction. On one hand the agriculture department backed endosulfan as the safest choice for crop pollinators and the cheapest pesticide available, in its very next point it added that if exports or the use of the pesticides were not allowed within the country, it would become difficult to dispose the existing stocks and may 'pose environmental hazards, if not stocked or disposed properly'.

The pesticide manufacturers and formulators association of India, through their counsels Harish Salve and Abhishek Manu Singhvi, requested the bench to allow exports of all stocks that is both for those for which orders had been received and for those where orders hadn't been received.

However, unhappy with the interim report the three judge bench had asked the committee to revert with answers of three basic questions a) What is the quantity of endosulfan in the country which is ready for exports in terms of pending orders (b) The Joint Committee must examine the conditions on which exports of endosulfan can be made to other countries keeping in mind the international conventions (c) The Joint Committee will also have to examine what steps can be taken for disposal of the pesticide, that will not be exported, in compliance with environmental norms.

The interim report was submitted to the court in the first week of September. The industry body has said that all over the world pesticides are phased out by making an advance announcement of cut off dates of imports or manufacture in order to be able to complete exhaust the raw materials and the formulated product within the shelf life.

The industry, in a meeting called by the agriculture commissioner, expressed their inability to dispose the existing stocks. Mumbai Waste Management Limited, a hazardous waste management company, approached by one of the endosulfan manufacturers for disposing the available stock of endosulfan, has quoted a price of rs 3400 a kg for endosulfan and rs 3900 a kg for HCCP, the raw product Disposing the pesticide, which costs about rs 235 per kg, is going to cost about 2000 crore.

The high prices is due to lack of facilities and no competition in the market. According to the interim report the industry has facility only for incineration for treating effluent which carry a small component of endosulfan. However, the Supreme Court will decide on the fate of the export of endosulfan on September 26.

Ironically, though the industry has been maintaining that endosulfan is not the cause for the health problems in Kasaragod, they had in an earlier counter affidavit, in pleading to allow exports had stated that, stocking the pesticide and not disposing it off safely can pose environmental hazard.

The fact that there are no facilities to dispose pesticides also raises the questions on how policy makers are making laws. The Pesticides Management Bill 2008, which will replace the 1968 Insecticides Act, has a provision for the disposal of pesticides within three months of their being declared spurious and out dated. The question then is how do then propose to dispose it- economically.

Last three months at the court

When the Supreme Court announced a ban on endosulfan on May 13, a joint committee headed by the Agriculture Commissioner and the Director General (DG) of the Indian Council of Medical Research (ICMR) was constituted to present to the court a report, within 8 weeks, on the health and the environmental impact of endosulfan.

The ban on endosulfan was imposed in response to the petition filed by the DYFI, the youth wing of the CPI(M). Based on this report the apex court would have decided to either continue the ban or lift the ban on the production, sale, use and export of the pesticides.

The committee missed the July 15 deadline. Not surprising though. The DG ICMR, VM Katoch had been emphasizing that 8 weeks was a very short period to present any report on health and environmental impacts of a pesticide. They wanted to extend their deadline to another 8 weeks.

The manufacturers claimed that no more endosulfan was being produced but they had to dispose off the stock. The Pesticides Manufacturers and Formulators Association of India (PMFAI) represented by counsel Harish Salve pleaded with the court to allow exports, immediately, at least to those countries with which deals had already been signed.

The petitioners represented by senior advocate K Venugopal were against the export of endosulfan unless it was to one of the developed countries with a safe disposal facility and strong precautionary principle in place.

The three bench court turned down the plea and asked the joint committee to file an interim report within three weeks explaining whether exports should be allowed or not and also suggesting a feasible option for disposing of the pesticide. The three judge bench comprised of chief justice SH Kapadia, justice Swatantar Kumar and justice KSP Radhakrishnan.

Ridiculous claims and studies that were never made public

Meanwhile, Salve continued to push the point that the problems in Kerala were not due to endosulfan. In a counter affidavit filed by PMFAI, the health problems in Kasaragod has been attributed to iodine deficiency, radiation and genetic inbreeding. Mohammed Asheel, the assistant nodal officer of Kerala's endosulfan rehabilitation project, called these statements ridiculous.

A member of the Supreme Court appointed joint committee, on the condition of anonymity, said that congenital anomalies due to consanguinity was ruled out as was clear from the study conducted by the Department of Community Medicine of the Calicut Medical College.

A Right to Information filed by C Nithyanand Pai, convener of Consumer Welfare Forum in Puttur (Karnataka), shows that ICMR had funded a project titled 'Effect of long term endosulfan exposure on male fertility' in 2003 but never revealed the study despite it being completed in 2006. The study was conducted by a team of doctors of Kasturba Medical College, Manipal.

It turns out that the 2003 study had concluded that reproductive hormones like follicle stimulating hormones (FSH) and testosterone levels were significantly reduced in endosulfan exposed population compared to those who were not exposed to endosulfan. The cytogenetic study also revealed significantly higher amount of genetic damage compared to unexposed control objects.

Another report published by the Kerala State Council for Science Technology and Environment (KSCSTE) concludes that endosulfan is still persistent in the soil and sediment samples in Kasaragod. The study was conducted in 11 affected panchayats in Kasaragod district in Kerala.

Excel Crop Care, the biggest endosulfan manufacturer in the country, on July 20, sent legal notices to three doctors- Jayakrishnan T, Prabhakumari C and Thomas Bina- of the department of community medicine of the Calicut Medical college for their report on endosulfan. A legal notice was sent to the principal of the college C Ravindran and S Muralidharan, a scientist at the Salim Ali Centre for Ornithology and Natural History (SACON).

Muralidharan had analysed the data that was sent to SACON by the Calicut Medical College. The report indicted endosulfan for the health problems of those living in the cashew plantations in Kasaragod, Kerala. The manufacturer demanded that the study be withdrawn with immediate effect. The opposition has been demanding the state to stand up for the doctors and take cognizance of the legal notice especially since this was a study that was done on behalf of the state government.