Indictment that all is not well with Indian honey

After an European Union ban on Indian honey and United States raising concerns on India's role in circumvention of Chinese honey, Indian honey industry could use some good news.

Kejriwal Bee Care India (Pvt) Limited has become the first in the world to be given the True Source Honey certificate. True Source Honey, an industry initiative in the United States, was started to raise awareness of the problem of incorrect sourcing of honey. The initiative, a global honey traceability service which was started in 2010, works with honey companies in the country of origin and US importers to ensure that there is no circumvention of honey especially Chinese honey.

US had imposed heavy anti dumping taxes on Chinese honey in 2001 after it was found to be tainted with antibiotics and heavy metal and was being flooded in the US market at a very cheap rate. The anti dumping duty was largely done to protect US honey producers who were getting hurt due to the flooding of cheap Chinese honey. 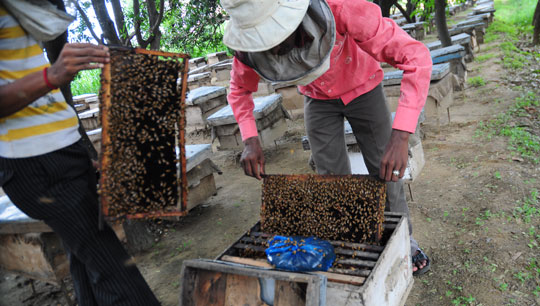 "We applied for True Source Honey certification at the end of 2010 and the process of audit began in February this year. This is a proof that not all honey suppliers are importing cheap Chinese honey and re exporting them. This is an important step in ensuring India's reputation in the global market," said Prakash Kejriwal, director, Kejriwal Bee Care (Pvt) Ltd.

The need to go for a certificate is an indictment that Indian honey was coming under scanner for the honey it exported to US. The allegation is that Indian exporters were blending Chinese honey with Indian honey and re exporting it.

Indian exporters had been in the radar for the past few years for transshipping Chinese honey by blending them with Indian honey and re exporting them. In September last year, US attorney had announced an indictment against 11 German and Chinese executives and six corporations for a scheme to smuggle illegally produced-Chinese honey in to the US. Nearly $80 million US of anti dumping duties was avoided through these transshipments.

The indictment order did not name the Indian company but called it “Indian Transshipper 1” and stated that it was a citizen and national of India who used “Indian Honey Company” to receive in India Chinese-origin honey shipped from China; blend a percentage of the Chinese honey with Indian honey; mislabel the Chinese honey as originating in India; and ship the Chinese honey into the United States, all on behalf of a company owned by Alfred L Wolff, the ALW FOOD GROUP. (see DTE September 30,2011 "What's in your Honey?)

While some Indian exporters have been calling it an anti-India honey propaganda there are others within the industry and some officials in the regulatory bodies, on the condition of anonymity, confirm India's role in blending and re export of Chinese honey.

However playing it safe and trying to avoid another ban was the Directorate General of Foreign Trade of the Ministry of Commerce and Industry. In February this year it issued a notification imposing certain restrictions on honey exports to EU and US. According to the notification, honey exported shall be wholly obtained from Indian origin and that no blending will be permitted with honey originating from other countries.

The latest allegation comes in a report by Pulitzer prize winning journalist Andrew Schneider published in Food Safety News on August 16, 2011. The report alleges that "Little Bee honey, a subsidiary of Kashmir Apiaries, had imported 16 consignments of more than 688,000 pounds of honey from China between July and August, this year. International shipping documents further shows that within the first week of August, six shipments of Little Bee Honey were exported to US and they had the same identification numbers of the honey shipped from China."

When contacted Little Bee Impex denied these charges and replied via e mail. "We are happy to inform that the company is not importing any honey from China and even not a single consignment was ever found to contain Chinese honey/ barred from entering into USA, as claimed by the author and all such allegations are rubbish and entirely baseless."

However a quick look at the USFDA alert again throws up Little Bee's name. Little Bee Impex is on the red list of USFDA which means detention without physical examination for containing Fluoroquinolones (a class of antibiotics containing enrofloxacin and ciprofloxacin)and had been detained on July 12 this year. Fluoroquinolones, in a 2006 consignment had been traced back to China. Since then in order to avoid these consignments, orders have been given to detain without physical examination (DWPE) all shipments of honey, honey products and blended syrups from the firms listed for Import Alerts. And Little Bee is one of them. However they have replied saying that this was routine and their consignment was cleared and released in July.

Though the True Source Honey certificate ushers in good news for the Indian honey trade it does raise a few questions on the capability of our regulatory bodies. An official of the Export Inspection Council (EIC), the body that is responsible for inspecting the quality of exports and certifying them, said that a third party audit to determine traceability was welcome.

According to industry sources, the EIC checks what is being exported but they have no power to check its imports. They have to rely on the data provided by the exporters and till date no exporters have declared that they imported any honey, added the source.

However, though there is a lot of backward bending to save the export market, the Indian consumers continue to be the scapegoat. There is no ban on import of Chinese honey but they are not allowed to be re exported to EU and US, two of the biggest markets for Indian honey. So effectively all the imported Chinese honey, that can be tainted with antibiotics and heavy metals, can be blended with Indian honey and sold within the country.

The Bureau of Indian Standards too has formed a committee to set standards for antibiotics in honey. The committee was formed in January and they have met once since then. So till such time that our regulatory bodies set standards the Indian consumer will have to fend for themselves.