The Maharashtra Pollution Control Board (MPCB) told the Madhya Pradesh High Court in an affidavit that the DRDO facility (Defence Research and Development Organization) at Nagpur neither has the requisite infrastructure nor the storage facilities for handling the nearly 320 tonnes of hazardous waste lying at the defunct Union Carbide plant in Bhopal for the last 27 years.

The affidavit was submitted to the court on September 7.

It also turns out that the incinerator at the DRDO facility has been non-functional for the past two years. The affidavit said that under present conditions it is not possible for MPCB to authorize DRDO to go ahead with the disposal of the toxic waste since it will not be possible for the Board to oversee the work. 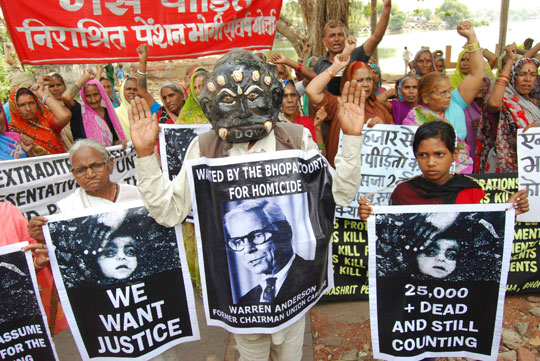 MPCB’s statement has proved to be a major embarrassment to the Defence Research and Development Establishment (DRDE) at Gwalior which had claimed that the Nagpur facility has the required infrastructure to handle the waste.

MPCB also informed the court that samples of toxic waste collected by it, as per court instructions have been sent to a nationally accredited laboratory for analysis. The court has granted MPCB time till September 22 to file a comprehensive report.

No Entry in Maharashtra

Thousands of people were killed in Bhopal when a poisonous gas leaked from Union Carbide’s pesticide plant in 1984. A year after the disaster, authorities collected tonnes of toxic waste and left it in the factory yard. Most of it remains untreated. The cracks in India's waste disposal system began to show after the debate on the disposal of Bhopal waste began. The controversy over the disposal of the toxic waste erupted after Jabalpur Bench began hearing a petition filed in 2006 by the head of the Bhopal Gas Kand Sangharsh Morcha, asking for safe disposal of the waste.

The Jabalpur bench of the Madhya Pradesh High Court had in the first week of July instructed the Madhya Pradesh government, the Defence Research and Development Establishment (DRDE) and the environment ministry to make arrangements within 10 days for the disposal of the waste at a facility of the Defence Research and Development Organization (DRDO) near Nagpur. This order was met with a lot of protests by residents and activists. BJP MLA from west Nagpur Devendra Fadnavis and non-profits Vidarbha Environmentalists’ Action Group (VEAG) and Janmanch filed a public interest petition in the Bombay High Court against the disposal of the waste on July 19. The same day the court ordered a stay on the transfer till the hearing by the Jabalpur Bench on July 28.

Then the Jabalpur Bench of the Madhya Pradesh High Court, on July 28, ordered the Madhya Pradesh Pollution Control Board (MPPCB) to not allow any movement of toxic waste from Bhopal's Union Carbide site to the Defence Research and Development Organization (DRDO) incineration facility at Butibori near Nagpur.

Maharashtra government claimed that Madhya Pradesh had not sought a No Objection Certificate (NOC) from them. In the intervention appeal the Maharashtra government added that since there was a facility in Pithampur, near Indore, to treat such waste, the waste should be disposed off within the state itself.

The site where the incineration is proposed is close to thickly populated Butibori MIDC (Maharashtra Industrial Development Corporation), said Sudhir Paliwal of VEAG. “Air pollution from the incineration could put residents at risk,” he added. The DRDO facility was chosen at the initiative of DRDE after the Madhya Pradesh government’s attempts to dispose it in its own state and Gujarat failed due to stiff public protests.

During the July 19 hearing, the Maharashtra Pollution Control Board (MPCB) said the DRDO facility did not take its permission to bring the waste into the state. Maharashtra’s environment secretary VN Singh had written to the Madhya Pradesh government, saying the latter would require MPCB clearance to transfer the waste.

Satinath Sarangi of non-profit Bhopal Group for Information and Action said, “The Madhya Pradesh government is trying to downplay the seriousness of the issue. In 2009, it tried to declare the defunct factory’s premises safe and open the gates, but was prevented because of public resistance.”

Referring to the current disposal order, Sarangi alleges it is influenced by the state itself. “This is clear from the fact that the decision was taken without checking whether clearances were in place,” he says.

The waste has nothing to do with the gas accident, but is instead caused by UCC/UCIL dumping and disposing off waste indiscriminately on the site. All pesticides found in the soil and water samples were manufactured at the site and heavy metals, especially chromium and mercury were part of the process of manufacture.

“Of the 27,000 tonnes of waste lying outside the factory that is contaminating the groundwater and the air in the area, why is the government destroying only 346 tonnes kept in a secure condition inside the factory?” questioned Rachna Dhingra, a colleague of Sarangi's.

A 2009 DRDE report said the toxicity level of the waste was low. But a report by Delhi non-profit Centre for Science and Environment, in the same year, showed groundwater in area three km away from the factory highly contaminated with pesticides and heavy metals.

Activists made public a letter written last year by the CEO of Thermax Limited, the only company that supplies incinerators in India. The letter says there is no incinerator in the country that can dispose of the Bhopal waste- a fact that even the DRDO has acknowledged.

The protesters are demanding the waste be transferred to an OECD (Organization for Economic Cooperation and Development) country that has proper facilities for disposing of such waste, and that Dow Chemicals bear the cost.