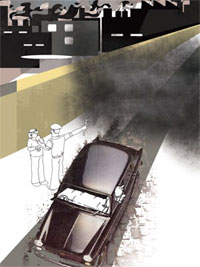 The mandate of the committee was as follows:

(i) To examine the existing monitoring procedures/methodology adopted under EIA and CRZ Notifications.

(ii) To provide suggestions for an effective monitoring mechanism for various projects that are accorded clearance.

(iii) To provide suggestions for the monitoring mechanisms to bring in quantitative analysis of the parameters listed in the environmental clearance (EC) letter.

(iv) To provide suggestions for use of information technology for effective monitoring at Ministry/State level, Regional Office level and at the level of industrial unit.

The above committee submitted its report in January, 2011 and recommended various actions for more effective monitoring and to achieve intended goals. One of the recommendations was to constitute a committee under the Chairmanship of Dr. B. Sengupta, Former Member Secretary, CPCB with representatives from Regional Offices of MoEF and CPCB to develop criteria and formulate guidelines for categorization of non compliances into the category of serious and not so serious.

Categorisation of non-compliance into Serious/Not-so-serious
The MoEF while according environmental clearance generally stipulates two types of conditions, ‘Specific Conditions’ and ‘General Conditions’ in all categories of projects which are covered under EIA Notification 2006 or Coastal Regulation Zone Notification, 2011.  Specific conditions vary from one sector to another whereas general conditions by and large remains the same. The committee, therefore, decided to categorise general conditions across all projects and specific conditions sector wise for effective monitoring of EC conditions. The sectors selected for the categorization were in line with the ones Environmental Appraisal Committee constituted for appraisal of projects for environmental clearance.

The most obvious question is on what basis the non-compliances are categorised as not-so-serious. What is obvious is that once these recommendations are notified there will be uniformity in terms of action taken against non-compliance of EC conditions. But nevertheless, there is no rationale provided in the report that could be referred to understand why some conditions are not-so-serious and some are serious.

Another issue is how to monitor these conditions. Some of the conditions are straight forward which can easily be monitored. But some of the conditions like 'appropriate mitigative measures shall be taken to prevent pollution of the river water/nallah located close by the mines' or 'overburden should not be kept active for long period' are very subjective conditions which are open to any interpretation by the industries. Efforts should be made to quantify these conditions in order to make their monitoring simple. Some of the observations on committee report is listed down in the table below.

Strict Penalty for non-compliance?
The mandate of the committee was to categorise consent condition (general or specific) into serious and not-so-serious. Serious non-compliance means direct closure order/notices depending upon seriousness of non-compliance and the Non-compliances categorized as ‘Not So Serious’ will become ‘Serious’ when the particular condition remained ‘Non Complied’ during submission of Second Six Monthly report after receiving environmental clearance. The following penalties are suggested in the report to deal with non-compliance of EC conditions as per E (P) Act:

There is subjectivity in Point 1 and 2 of table 1: Penalty suggested by committee. Both, point 1 and 2, deals with serious non-compliance but different penalties. It’s obvious that agency will take action under point 1 where there is a definite proof of threat to public life and property. On the contrary, the agency will act according to point 2 when there is no definite proof.  It’s very subjective. For example, an industry discharging effluent with high concentration of heavy metal. This is a serious case of non-compliance and industry should be penalised as this has serious implication on aquatic life as well on human health. But what does proof mean in this case. It will take time to establish the proof. Does it mean company will be served only notices? It’s not rationale. On paper, it seems the committee have recommended punitive action against non-compliance but on ground only notices will be send to defaulting industries.

There are ample provision under E(P) Act to penalise industry for their non-compliance of EC conditions (see table 2: Power under Environment (Protection) Act, 1986). Obviously question is not about ‘power to take action’ but no faith of regulatory agencies on these provisions.

Under section 5 of E(P) Act, agencies can issue direct closure order for non-compliance. They need not to send notices after notices but direct closure order. Under section 15, there is provision of financial penalty.  It talks of Rs one lakhs penalty for non-compliance to provision under E(P) Act. If non-compliance continues, there is additional penalty of Rs five thousand for every day during which failure continues. These provisions make non-compliance cheaper than compliance. If committee would have recommended heavy financial penalty, it would have been a welcome step. But there is no necessity of suggesting subjective penalties for non-compliance. “Section 5 of E(P) Act is specific, relating to issue of direction. As such notice cannot be issued under the said provision. If that is allowed, it will dilute the provision and would be against the intent of Parliament which enacted the Act. Notice could be issued under other provisions for getting clarification but not under section 5 of EP Act,” says a senior High Court Lawyer, who does not want to be named.  He further added repeated failure to comply EC conditions’ should not be allowed. EC conditions are to be complied in letter and spirit at the first instance itself. Periodation of compliance would defeat the very objective of environmental clearance.

Way ahead: Heavy financial penalty for non-compliance.
In the US, the federal and state EPA's (Environment Protection Agency) can issue an administrative order to resolve a violation without going to the courts for relief. Administrative orders are legally enforceable, provide evidence of the violation, and afford the violator due process and an opportunity to be heard.
Under an administrative order, the violator will be required to take corrective actions within a prescribed time period, penalties may be assessed, and supplementary enforcement projects may be established. Where appropriate, the USEPA and state EPAs use administrative enforcement as their preferred first response for routine enforcement cases because it is viewed as more expedient than the judicial system. The Ministry of Environment and Forests should also provide Central Pollution Control Board and State Pollution Control Board administrative order as a tool for ensuring compliance

Say no to deathly waste dumps