Poly-ethene carry bags are the biggest nuisance amongst all the plastic waste. Each year, millions of plastic bags end up deteriorating the environment due to their improper disposal. Plastic bags being resistant to bacterial degradation are although a commercial success but inevitably become a major threat to the environment.

Environmental Concerns:
A plastic bag takes an average of one thousand years to decompose completely. In the meanwhile, it breaks into small pieces which remain embedded in the soil. The recent Indian enactment - Plastic Waste (Management and Handling) Rules, 2011 - specifies that the minimum thickness of plastic bags should be of 40 microns as opposed to the previous 20 microns specified by the Plastics Manufacture, Sale and Usage Rules, 1999. This is primarily because the thickness of the bag determines the strength of the bag to break into smaller pieces. The thinner the bag is the higher is the probability of its breakdown and mixing with the soil which seriously deteriorates the soil and marine fauna.

Another important problem is that plastic bags are lightweight and often get caught in the wind. They entangle with the trees and cover the leaves and branches interfering with their photosynthetic processes. On ground, they block drains and sewers. Blockage in the drainage system by plastic was the primary cause for the 2005 floods in Mumbai which killed thousands. Severe floods have also affected countries like Bangladesh and Manila due to the clogging of plastic bags in the drainage system. Plastic bags were banned in Mumbai and Bangladesh after these floods.

Plastic Waste (Management and Handling) Rules, 2011
The draft rules namely the Plastics (Manufacture, Usage and Waste Management) Rules, 2009 were published by the Government of India on 17th September, 2009 in the Gazette of India. The objections and suggestions made by the public were duly considered by the Central Government and starting from 7th February, 2011 the Plastic Waste (Management and Handling) Rules, 2011 came into effect. These rules overruled the Plastic Manufacture, Sale and Usage Rules of 1999.

Prescribed Authority
According to the rules the prescribed authority responsible for enforcement of provisions on authorization, manufacturing, recycling and disposal are the State Pollution Control Board for Sates and Pollution Control Committee for Union Territories. Whereas, municipal bodies are responsible for enforcement of the provisions pertaining to use, collection, segregation, transportation and disposal of used plastics.

Rules have also directed to set up a State Level Advisory Body to monitor the implementation of rules. The Advisory Body would be headed by Chairman (Secretary, Dept of Urban Development) and comprise of members from State department of environment, SPCB/PCC, urban local bodies, NGOs, industries and academic institutions.

Conditions to be adhered to
The Rules have laid down certain conditions for manufacturing, stocking, sale and use of plastic carry bags and sachets. As per the Rules carry bags should be manufactured in white or made using pigments and colourants which are in conformity with Indian Standards listed under IS 9833:1981 and recycled carry bags will have to conform to the Indian Standard IS 14534:1998 (Guidelines for recycling of plastics) and bear a label or a mark “recycled” and as per the guidelines prescribed in the Rules. Plastic carry bags and multilayered packaging should also have name, registration number of the manufacturer and thickness printed on it. Carry bags made from compostable plastics should have a label saying “compostable” and conform to the Indian Standard IS/ISO 17088:2088.

The Central Government has introduced an Extended Producer’s Responsibility (EPR) clause in the new rules. According to this clause, the municipal authority may ask manufacturers – either collectively or individually – in line with the principle of EPR to provide the required finance to establish plastic waste collection centres.

Although, the introduction of EPR in the Indian plastic waste laws is a necessary addition, but it has been employed in a very lenient way, allowing several manufacturers to defy the law easily. Leaving the collection of the funds simply at the discretion of the municipal government arbitrarily, with no periodic management by the state government, reduces the scope of its applicability in the current Indian scenario. Development of recycling centres alongside the waste collection centres should be made compulsory for all manufacturers. The producers can be given the option of establishing centres collectively, but a restriction on the number of producers who can establish one centre should be enforced.

Explicit pricing of the Plastic Bags
No carry bags will be made available free of cost to the consumers by the retailers. The concerned municipal authority may determine the minimum price of the carry bags.

This is a new provision added to the Rules. Attaching a price to the plastic bags is a good call by the Government. It will, undoubtedly, lead to a reduction in the number of plastic bags utilised by the consumers. However, the Central Government should not give discretionary powers to the municipal authorities for fixing the price of the bags. A controlled regulation, at periodic intervals, is necessary to ensure that this rule is being strictly adhered to by the municipal authorities. The Municipal Authorities in Mumbai have set a price between Rs. 1 and Rs. 7 for goods sold in plastic bags in supermarkets and malls. The Bruhat Bangalore Mahanagrika Palike – which is the main implementing authority in Bangalore – has determined the lowest price of a plastic bag. The average cost to a consumer however comes around Rs 3. Delhi markets charged an average of Rs 5 for plastic bags in main markets and Rs 3 in smaller markets before it introduced a complete ban on the bags.

No person shall manufacture, stock, distribute or sell any carry bag made of virgin or recycled or compostable plastic, which is less than 40 microns in thickness.

The new Rules have put a moratorium on manufacturing, stocking and distribution of plastic carry bags less than 40 microns. This addition to the new rules can prove to be highly effective if properly implemented by the municipal authorities. A 40 micron bag costs around Rs.2 whereas the usual 20 micron bag costs around 10 paise. Therefore, the demand of the 40 micron bags by small chemists, vegetable vendors and small retailers is exponentially less as compared to the 20 micron bags. As mentioned in the new rules, if the manufacturing of bags less than 40 microns is effectively banned, then there will be a stark reduction in the number of plastic bags available to the consumer.

Hyderabad has imposed this law extremely stringently and has even specified penalties for flouting this law. For the first offence, the manufacturing unit would be slapped with a penalty of Rs. 25,000 to Rs. 50,000. Subsequent violation of this law would lead to the cancellation of the unit’s license. Penalties will be also awarded to traders who utilise illegal plastic bags. A first offence can cost them anywhere between Rs. 5,000 and Rs. 2,500. Under Labour Act, the next violation would lead to the cancellation of the shop’s license. Besides the manufacturers and traders, citizens using these bags will also be penalised between Rs. 250 to Rs. 500.

Two primary reasons for increasing the thickness of the plastic bags is that the cost of the production of thicker bags is higher which would inevitably lead to a decrease in the production of the bags by the manufacturers and purchase by the customers. The second reason is that thinner bags are more difficult to recycle as opposed to thicker bags.
Although this law has been written on paper, it is yet to materialise in most states and metropolitan cities. In most states, several suits have been filed by the manufacturers against these laws which are still awaiting a final judgment. In the meanwhile, they continue to produce bags less than the specified thickness and thus polluting the already deteriorated environment.

Plastic material, in any form, shall not be used in any package for packing gutkha, pan masala and tobacco in all forms. 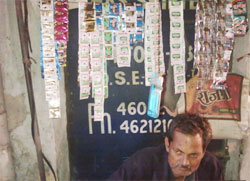 Introduction of the new rules which impose a ban on selling gutkha, pan masala and tobacco in plastic packaging has received a massive protest from the tobacco industry in India. This ban, however, has brought some definite relief to the manifold environment conservationists worried about the numerous plastic sachets littering the roads.

The discarded empty sachets have been considered as a major pollutant due to the leftover carcinogenic material in the pouches in addition to the plastic used to make these pouches. The low prices – starting from Re. 1 in most places – can be accredited as one of the primary reasons for their mass use by the youth and elderly alike.

However, this law has been loosely implemented and several kiosks all over India still sell gutkha and tobacco in plastic pouches. New packaging made of aluminium and paper has been introduced, but its utilisation is still low in the market due to the higher cost of packaging. Most shopkeepers and customers who are still selling and using plastic pouches claim to be oblivious of the new rules. Awareness regarding these new rules needs to be spread amongst the masses for proper implementation.

The new rules have addressed a few major problems related to plastic waste management which have in turn unearthed some issues which both - the manufacturers of plastic and the implementers of the rules - need to work out in coordination to ensure environmental safety. However, the immediate need of the hour is a more forceful implementation of the law which has been, as visible even the national capital of New Delhi, lackadaisically enforced by Government. A more careful approach in the utilisation of plastic by the consumers will definitely bear fruitful results for the environment.

Waste manager dumps it in river