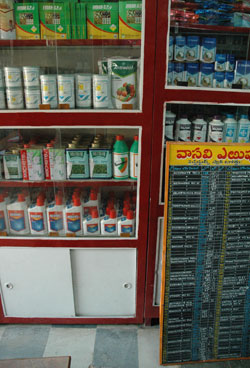 The Pesticide Management Bill, 2008 which will replace the Insecticides Act 1964, does introduce a few positive changes like special courts for speedy, disposal of spurious, misbranded, expired pesticides within three months and inclusion of the two farmers- one male and one female in the Central Insecticides Board. The bill has increased the number of members in the registration committee from 5 to 10. According to the Pesticide Management Bill, 2008 no pesticide can be registered unless the tolerance limit has been fixed under the Food Safety and Standards Act 2006, which became fully operational on August 5, 2011.

But there are still many loopholes that need to be plugged. For instance pesticides already registered in the Insecticides Act 1968 are automatically deemed to be registered under the bill. Maximum Residue Limits (MRLs)of some of the pesticides have not been specified for some currently registered pesticides.

According to the Department of Agriculture and Cooperation, 229 pesticides have been registered of which 49 pesticides do not have MRLs, of which they say MRLs for 39 pesticides are not required while there are 10 pesticides for which no tolerance limit is fixed. This would mean that some of the pesticides that have been registered without MRLs fixed for them will continue to be so. Moreover, MRLs should be based on Acceptable Daily Intakes (ADIs). MRLs can be considered safe only if the cumulative daily intake of pesticides remains within the ADI, which should be worked out based on chronic toxicity.

Moreover, with agriculture being a state subject, the state should also have the complete power to ban, restrict or allow the use of pesticides. According to the Insecticides Act 1968, the state could only temporarily ban a pesticide for 60 days and then extend it to another 30 days pending a study. That, in the Pesticide Management Bill has been extended to 180 days and 60 days respectively. The demand for a state control was raised by the former Kerala Agriculture Minister M Retnakaran as well as the farmers wing of the opposition party BJP.

There are two schools of thought here. One that believes that a power like this to the state will create chaos, with one state agreeing to a ban and its neighbouring states not. Instance being the continued use of endosulfan in Kerala, being smuggled through state borders, despite a ban. "The states will be responsible. It seems chaotic now because states have no power to ban so they do not act," said Jayakumar C of Thanal, a non profit in Kerala. He supports the demand for state control.

A liability clause centered around the 'polluters pay principle' should have been included in the new bill. The government clearly hasn't taken lessons from incidents like Kasaragod and Dakshin Kanada, where people were suffering due to the continuous spray of the endosulfan for over 20 years and are putting up a fight on a daily basis to get compensation either from the state or the centre. The bill should make the manufacturers liable and the liability should be proportional to the turnover of the pesticide manufacturers. An independent committee should be formed to decide on the quantum of liability.

The bill calls for review of pesticides but there are no time frames set for the same. The pesticides should be reviewed within five years or earlier. The funds for this periodic review should be drawn from a corpus of funds collected from the pesticide industry. The industry should contribute, a percentage of their annual turnover or a fee should be levied on their turnover or the value of the products sold, to the corpus.

What else needs to be fixed