In the ongoing negotiations to amend the Montreal Protocol to phase-down the use of hydroflourocarbons (HFCs), Intellectual Property Rights of substitute chemicals—mainly unsaturated HFCs (also called HFOs) and its blends— have become a major point of difference between developed and developing countries. Developing countries have expressed major concerns on this issue as two companies hold most of the patents to these chemicals, creating a monopoly. They have, therefore, asked for clarification and resolution of IPR issues before an amendment to the Montreal Protocol is adopted.

To understand the impediments that IPR poses for a successful phase-down of HFCs in developing countries, Centre for Science and Environment (CSE) and Council for Scientific and Industrial Research-Unit for Research and Development Information Products (CSIR-URDIP) carried out a study of the number and nature of patents filed in India around the manufacture and use of HFO 1234yf and its blends, especially in the mobile air-conditioning (MAC) sector.

The study finds that a large number of patents have been filed and many have been granted for the process of producing HFO 1234yf (Process Patents) for modifications in air-conditioning equipment that will use HFO 1234yf and its blends (Equipment Patents) and for the use of these chemicals in the refrigeration and air-conditioning (RAC) sector themselves (Application Patents). 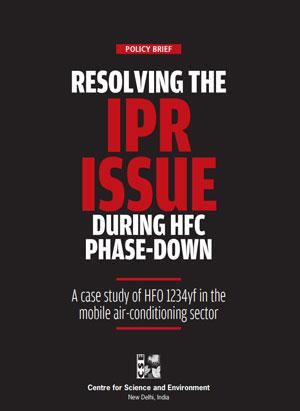