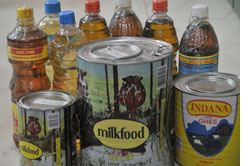 A study published in Current Science Journal (March 2012) has reported alarmingly high rate of increase in oil consumption in India. According to the study conducted by DM Hegde, project director at Directorate of Oilseed Research, the per capita consumption of edible oil in India has increased almost five folds during the period of 1950-2011.

The author argues that increase in oil consumption at this rate may pose, on one hand, increased risk of health problems due to high fat consumption on the other hand it will also mean dependence on import to fulfill the additional demand for vegetable oils.

Fat is an essential ingredient of the diet. It supplies energy and essential fatty acids that help body in absorbing fat soluble vitamins and maintaining metabolic balance. According to the dietary guidelines by National Institute of Nutrition (NIN), 15-30 % of the total energy intake should come from fats. The author calculated the average need of fat for Indian population to be 29 g per person per day which is equivalent to 10.585 kg per person per year. The rate of consumption of edible oil in India was 14.2 kg per person per year in 2010-11 which was considerably more than the average need. Consumption of fats in excess has been found to be linked with the increased risks of obesity and cardiovascular diseases (CVDs).

The per capita consumption of edible oil has almost doubled in last two decades. The authors attribute this increase to the increasing affordability among Indians. This trend is on the uphill and it means an added risk of CVDs. According to a report by WHO on Non-Communicable Diseases in South East Asian countries, CVDs are already the top reason of death in India. They cause 33% of total deaths caused by top ten reasons of death in urban India and 23 % of the same in rural India. CVDs also affect comparatively younger age group in India compared to the developed countries. About 52 % of the deaths caused by CVDs occur below the age of 70 compare to 23 % in the developed countries.

On the trade front, India’s status in last few decades has kept fluctuating between net importer and exporter of vegetable oils. However, as the study suggests, the per capita consumption may still keep increasing in recent future and surpass the government predictions as it has done in past, making India more dependent on imports. In order to meet the nutritional requirements of the people, India will require 17.84 mt of vegetable oil with the projected population of 1685 million by 2050. However, since the demand for edible oil has been proven to be very elastic with the affordability of the people, there is every chance that we will need much more of it.