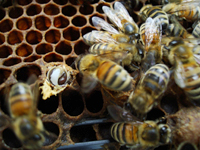 In a recent study by the Harvard School of Public Health, it has been found that level of pesticides in environment may be affecting the honeybee colonies worldwide. The study, which was led by Chensheng Alex Lu, an associate professor of environmental exposure biology in the Department of Environmental Health, found convincing evidence for the role of Imidacloprid, a commonly used pesticide in United States (US), and the Colony Collapse Disorders (CCD) among honeybees. It is noteworthy that certain pesticides have been consistently blamed for the CCDs that caused 30% to 90% decline in the number of honeybee colonies in US in 2006.

The new studies come on the heels of a year of damning evidence for these pesticides. Three separate studies in the last year confirmed that low-level exposures to neonicotinoid synergize with a common pathogen to dramatically increase bees' susceptibility to infection and the likelihood of death.

In a study published in January, exposure levels were so low as to be undetectable. Italian researchers have proven, again, that in a single flight over freshly sown corn fields, bees can be exposed to neonicotinoid contaminated dust from planters depositing treated seeds at acutely toxic levels. These same researchers have shown in 2010 and 2011 that sub-lethal exposures impair bees' learning and memory.

In the Harvard study released from the forthcoming issue of the Bulletin of Insectology, researchers found that 94% of the hives died after exposure to one neonicotinoid called Imidacloprid. The study team exposed bees to the pesticide via high fructose corn syrup at levels “determined to reflect Imidacloprid residue levels reported in the environment previously.”

Bees can be exposed in two ways: through nectar from plants or through high-fructose corn syrup beekeepers use to feed their bees. Since most US-grown corn has been treated with Imidacloprid since 2005, it’s also found in corn syrup.

The honeybees are important beyond honey production for their role as prime pollinators in agriculture. Big decline in their population may lead to huge loses in agriculture in many countries which produce fruits, vegetables, nuts and other livestock food.

The study was carried for 23 weeks and 16 hives were maintained with different doses of imidacloprid with one hive on control. It was observed that honeybees in 15 hives had died and the hives were almost empty with only few dead bees inside.

Bees in the hives treated with higher doses of imidacloprid died first. These symptoms clearly showed that the deaths were caused by pesticide doses. In other cases, if the deaths are caused by other reasons like disease or pest, generally the bees are found dead in and around the hives.