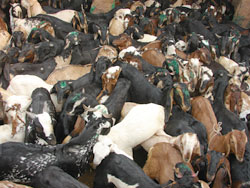 In a first of its kind, an amendment in the Drugs and Cosmetics Rules 1945 sets a timeframe for which animals treated with antibiotics should be kept out of human food chain. The Union Ministry of Health and Family Welfare issued the notification to regulate the use of antibiotics for livestock and aquaculture meant for food production.

The amendment, inserted in the rule 97 of the Drugs and Cosmetics Rules, has suggested that the antibiotics, which are used for therapeutic purposes in animals, should be labeled with the withdrawal period of the drug for the species for which it is intended for use. This amendment sets a time frame for which products should be kept out of the food chain; it is also known as the withdrawal period.

The withdrawal period is the period of interval between the last administration of veterinary medicines to animals under the normal conditions of use and the production of food stuff from such animals to ensure that food stuffs do not contain residues in quantities in excess of the maximum residue limits laid down.
The amendment explains that for antibiotics for which no withdrawal periods are mentioned on the labels, a standard withdrawal period will have to be followed. In this case, milk and eggs should be kept out of the human food chain minimum for a week, poultry and meat products should be kept out for 28 days while the fish and other marine products should be kept out for 500 degree-days (unit takes into account both time and temperatures).

Though these amendments acknowledge the problems posed by the incessant use of antibiotics, they might not be sufficient to reduce the antibiotics present in the food chain. “There is no infrastructure or monitoring mechanism to keep a check on antibiotics’ consumption level with the proposed regulation. It should ideally be regulated farm wise and the practice of factory farming should be banned to produce desired results,” said N G Jayasimha, Campaign Manager (Farm Animals), Humane Society International (HSI). HSI is an US based animal protection organization.