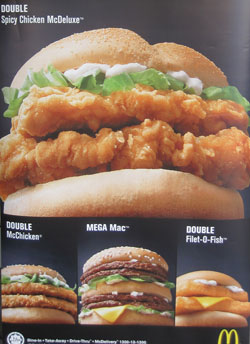 The researchers at INSEAD business school in France have concluded that food marketing successfully distorts portion size perceptions of people many a times.

Pierre Chandon, a professor of marketing at INSEAD who has been doing research on food marketing and people’s food perceptions and preferences, suggested that people generally misinterpret the tags like “extra small” and “low fat”. People generally consider foods with “extra small” label to have negligibly small contribution to their diet and they consider “low fat” to be synonymous to “low calorie” which may not be the case. Similarly, people also get misled by how the food looks like and assume its nutritional characteristics accordingly, irrespective of the information provided on the label. These misinterpretations lead to underestimation of the portion sizes of the food and may lead to overeating too.

Chandon, speaking at Harvard School of Public Health quoted examples of studies, which found difficulty among people in estimating portion sizes of food. In a 2005 study led by University of Scranton psychologist Michael E. Oakes, people preferred a cup of 1%-fat cottage cheese with three carrots and three pears over a “mini” Snickers bar when they wanted to lose weight. While the former was considered healthy, it had many time more calories than the latter.

Similarly, in a 2009 study by Chandon and Nailya Ordabayeva, it was seen that people underestimated food or drink amounts when the containers or cups they’re served in expanded in three dimensions (height, width, and length). For instance, shown two mugs—one that widens substantially near the top, and another that’s taller and thinner—study participants had trouble discerning that the shorter, wider mug actually held more liquid than the taller mug. They were better able to accurately estimate differences when the mugs were the same width, with one taller than the other. This experiment “really shows how hard it is to estimate volume,” Chandon said.

In a 2010 study by Chandon and Alexander Chernev, participants were asked to estimate calories for one unhealthy item (a cheeseburger) and one healthy item (a salad)—first separately, then together. When they considered the items separately, they estimated the cheeseburger at 597 calories and the salad at 89—a total of 686 calories. But when they considered the items together, they estimated a total of just 511 calories—as if, Chandon said, adding a healthy item to a meal somehow “magically” reduces its overall calories.

Given how hard it can be to accurately assess food amounts and calorie counts—and how this can contribute to the obesity epidemic—Chandon suggested that researchers and policy makers consider not only people’s self-reported beliefs and preferences regarding food, but also their actual preferences and behaviors, as well as new ways to accurately package and label food and drinks.