The M/s Korba West Power Company Limited. is planning to set up a thermal power plant of 600 MW (2 x 300) coal based thermal Power Plant at Village-Bade Bhandar, District-Raigarh, Chhattisgarh. The EIA has been prepared by the Nagpur -based consultant, Anacon Laboratries PvT. Ltd. The study area for the EIA study is 10-km radius.

The M/s Korba West Power Company Limited. proposes to set up a coal based thermal power plant of 600 MW having configuration of (2 x 300) MW. The area to be acquired for the the project is around 240 Ha.  The raw material, coal will be sourced from the nearby coal mine and water from the Mahanadi river.

According to the EIA, project will consume 3.15 MTPA of coal (indian coal) and 55200 m3 of water per day. The proposed plant will sourced water from the Mahanadi, which flows close to the plant.

For running a power plant, water and coal is the chief raw material. The EIA report has provided the information on coal requirement and estimated the water requirement for a power plant but failed to provide river flow information. Which is a significant and serious issues to see project feasibility in term of water availability.

According to the website of Ministry of Environment and Forest, from 2005 to 2009, the minstry has been given clearance to 30,580 MW power plant which have proposed to draw water from the Mahanadi. According to the estimation made by us, all these power plant will draw 2787044 m3 of water per day (assuming load factor 80% and specific water requirement 5 lit/unit), this is signifigant quantity and cummulative impact on water availability would be very high if all the plant starts its power generation. Addition of one more thermal power plant of 600 MW would create additional pressure of 55200 m3 of water per day on the Mahanadi. Hence it is a big question mark, whether river Mahanadi has suffieciet flow or water to support the power plant in Raigarh. And second important question is the cummulative impact on lean flow ie. during summer.

The river flow data, particularly the lean period flow (i.e. in summer) is cricial because River Mahanadi is being heavy exploited by the industries in the Chattisgarh. Every industries in Chattisgarh claimed that they would draw water from Mahanadi but failed to provide whether river has suffiecient water to hold industries or not. Meanwhile, River Mahanadi also supplies water to number of cities and iriigation canal for agriculture for example  cuttack city draw 11000 m3/day of water and Bhuneshwar 43000 m3/day for city supply. This clearly shows that Mahanadi is  extensively used not by chattisgarh but also Orissa is also heavy dependent on the Mahanadi. Hence, detail river flow assessment is very important.

EIA states that ESP will be installed with the stack as a pollution control equipment and claimed that the emissions from stack will be less than 50 mg/Nm3. However EIA report failed to provide the techanical specifiaction of ESP such as number of field and area of collecting electrode etc. Moreover, EIA also state that they will use coal having ash content in range of 40 to 45%. (see page 2.8). In such high ash containig coal and lack of techanical specification on ESP, it is doubtful that ESP will achieve the standard of  less than 50 mg/Nm3

There is discripency in data provided in the EIA report (see page 4.9, table 4.1). According to the EIA report, total SO2 from the proposed project is estimated around 470 gram/sec. If we compute on annual basis (i.e. 470x24x60x60x350 operating day). The figure is coming 14213 tonne/year. It seems that SO2 contribution from fuel oil is not accounted in the calcualtion. On the basis of annual coal consumption (i.e 3.15 million tonne) and fuel oil consumption, the total SO2 emission from the plant is coming around 25280 tonne per year. It mean there is a difference of 11067 tonne of SO2 per year. It clearly shows that the emissions load in the EIA has not been calculated correctly. If the emission load is incorrect then entire modelling prepared in the EIA report is incorrect.

Similarly, no mitigation measures has been suggested for NOX emission as power plant will add 7998 tonnes of NOX per year to the ambient air (see pp 4.9, table 4.1, details of stack emissions). NOx emissions can be detrimental at low concentrations of 3-20 ppm. The report has not suggested any mitigation measures for the same.

Mercury emissions: Mercury emissions from the power plant have been completely overlooked by the EIA. However, this should not be ignored, as thermal power plants account for 70 per cent of the country’s mercury emissions. Considering average mercury content of 0.25 ppm in coal, mercury emissions from the proposed plant is around 771 kg per year. This mercury is highly toxic to human health once it enters in food chain; it will affect the entire food chain including the human being. It is non-degradable and its impact is permanent. The Raigarh in future would be worst affected by mercury contamination, according ministry of environment & forest website, in Raigarh alone ministry has given clearance to 21,205 MW in between 2005 to April 2009, this figure is excluding of power plant prior to 2005. A single proposed plant of 600 MW has potential to emit 771 kg of mercury every year; one can imagine the quantity of mercury to be emitted from 21,205 MW. This is a significant issue for the Raigarh district.

Carbon dioxide emissions: The EIA has also completely ignored CO2 emissions from the proposed plant. This is not acceptable, as the thermal power sector contributes 11 per cent of the total CO2 emissions, and 65 per cent of the industrial greenhouse gas emissions. The proposed plant will release 4.27 million tonnes of carbon dioxide per annum (calculated at the rate of 997 gms of CO2/kWh of power generated).

Top soil quantity : EIA has failed to address the impact on the top soil. Further, report has provided a mileading statement on top soil usage and failed to quantity the total quantity of topsoil. EIA states that top soil will be use in green belt development and state that “No significant adverse impact on soil in the surrounding area is anticipated” which is a very superficial and midleading statement. If we see in term of land requirement, the project will acquire 240 ha of land for the project. If we further look the break up of land use see table below. The plant will clear 180 ha of land for the different activities, it means expect 80 ha of land for the greenbelt, rest will be use for the plant development. According to CSE estimation, quantity of top soil to be generated as result of land clearing would be 9 lakh m3 (Assuming 0.5 m is the thikness of topsoil and 180 ha of land to be cleared). It is a big question mark, how a power plant will use such huge quanityt of top soil and where they will use top soil. The area earmarked for greenbelt development i.e. 80 ha already have soil cover. It is important to note that project and surrounding areas has modereate to good quality of soil.

EIA has given the land use pattern of 10 km radius but failed to provide breakup of landuse of acquired land (I.e. 240 ha).  EIA claimed that around 55 % of land in 10 Km radius is either unirrigated land or area not available for cultivation. However, in page, see table 3.2.5 Fertility status of soil, EIA state that fertility of soil is average to good. If this were the condition then % of irrigated land would be high.

Fugitive emission from coal handling and fly ash: The company will use 20 ha of land for the coal handling and storage. Further, coal is proposed to be stored in open, which is a bad practice from the environmental perspective. The open coal storage yard has high potential to increase the fugitive dust and also impact surrounding ambient air. Being a significant issue, EIA failed to provide mitigation measures for the same such as closed storage yard. Similar daisy picture was portrayed for fly ash handling and management. According to the EIA, around 75 ha of land has been proposed for flyash disposal but in EMP no migation measures were proposed to tackle fugitives dust to be generated from ash disposal area.

Flyash : EIA has failed to provide the qantity  of ash to be lifted for commercial use and the quantity of flyash to be disposed off in ash disposal pond. EIA has calculated the land requirement and life of ash pond assuming the total flyash to be disposed off in ash pond. This is a significant issue both from the fugitive and groundwater contamination point of view. However, this was presented in a superficial manner. Moreover, EIA also mentioned that depth of ash pond would be 14 meter. But report failed to provide the land and groundwater contamination due to ash disposal pond. EIA also failed to provide mode of disposal of flyash (wet or dry disposal) to ash disposal pond.  Even the Environmental Management Plan (EMP) for flaysh management has failed to address the migation plan and provision of liner material (LDPE liner is better) to prevent the groundwater contamination due to ash pond.

Impact on water resource: EIA has proposed to take 55200 m3 of water per day from the Mahanadi river but failed to provide the river flow information and water availability in Mahanadi to support this plant in summer. EIA also failed in providing the other competative users and other industrial plants in downstream who are dependent on Mahanadi. 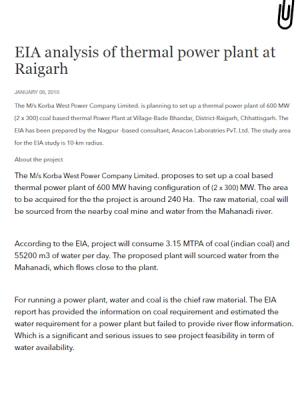