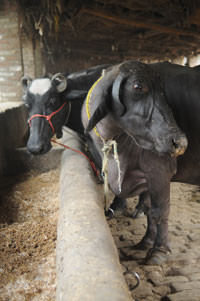 The petitions were filed in 1999 and 2005 by Environmental Defense, Center for Science in the Public Interest, Food Animal Concerns Trust (FACT) and the Union of Concerned Scientists along with some other groups. When there was no response from the agency to the previous two petitions, the organisations filed a suit against USFDA in May 2011 again.

Though it did not challenge the claims of the petitioners, USFDA argued that withdrawing the antibiotics would be an expensive and a resource-intensive process. Instead of implementing a formal process to take drugs off the market, the agency plans to reduce the use through voluntary withdrawal by pharmaceutical companies that market antibiotics for feed.

This approach has received flak from the petitioners. "Instead of adhering to its mission to protect consumers, the FDA is waiting for the drug companies to voluntarily do what the agency is legally mandated to do. There is absolutely no reason to believe that drug companies will voluntarily reduce sales of antibiotics and act against their own financial self-interest. Without reductions in antibiotics used, it is impossible for there to be any public health benefit," said Steven Roach, FACT's public health programme director. "For this reason we do not see the FDA's plan as an answer to the petitions or the problem of antibiotic resistance."

FACT is a Chicago-based non-profit that promotes humane and healthy farms through science-based advocacy and support to farmers; it also supports the Preservation of Antibiotics for Medical Treatment Act. The Act has been introduced in the Congress and has been referred to the committee on health, education, labour and pension. This federal legislation, if passed, would require the FDA to address non-therapeutic antibiotic use and make it easier for the agency to withdraw animal antibiotics that are found to be unsafe from an antibiotic resistance standpoint.

"Reducing antibiotic overuse is essential for making sure antibiotics will keep working for years to come—to treat our sick children, families and animals. It is outrageous that FDA considers voluntary self-regulation by drug companies to be enough. It is clearly not," said FACT's executive director, Richard Wood.