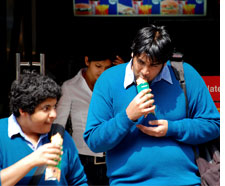 The Delhi High Court has given the Food Safety and Standards Authority of India (FSSAI) a six month period to come out with guidelines on implementing rules to ban junk food in and around schools. The two  judge bench gave the order on January 11. The next hearing is scheduled for July 25.

The court passed the order on a Public Interest Litigation (PIL), filed by Uday Foundation, a non-profit in Delhi, which alleges that junk food causes damage to health and mental growth of children. The PIL was filed in 2010. The foundation works on children's health, and has sought a ban on sale of junk food in schools and within 500 metre radius of educational institutions.

The All India Food Processor's Association (AIFPA), however was allowed to become a part on November 2 last year. This nodal agency of the food processing industry in India, represented by senior counsel Mukul Rohatgi, wanted its point of view to be considered by the court since it did not want to be inadvertently dragged into the ban. This is because the petitioners in the case have failed to specify what kind of food items should be included in junk food or fast food. The association represents those involved in the processing of fruits and vegetables, meat and fish, milk and milk products and makers of biscuits and confectionary products.

However, the centre was supposed to file an action taken report by December, which they didn't on account of lack of time. They filed their report on January 10. The affidavit states that though taking a decision on banning junk food in schools is an administrative decision of those who run it, the Ministry of Health and Family Welfare have taken some actions.

For instance the ministry of health and family welfare has already requested the chief ministers and the health ministers of the states and the ministry of human resources development (HRD) for taking steps to ban, restrict availability or withdraw such food items from canteens of schools and educational institutions.

The affidavit also pointed out that a circular has been issued to hostel mess in navodaya vidyalaya by the navodaya vidalaya committee suggesting daily menu for hostel menu and had very clearly stated that no junk food was to be served in the hostel. The committee is an autonomous body under HRD ministry. This circular was issue on July 13, 2011.

After completion of this process the FSSAI will be in a position to frame guidelines for making available healthy food in school canteens. At the moment the Food Safety and Standards Act does not define any food as junk food or fast food. All food that has been categorized as junk food falls under the category of proprietary food.