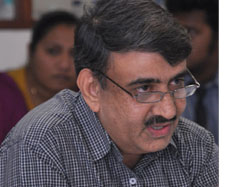 The World Health Organisation recognises childhood obesity as one of the most serious public health challenges of the 21st century. The problem is global. According to WHO, childhood obesity is steadily making a stronghold in developing and least developed countries, particularly in the urban settings. Globally, in 2010 the number of overweight children under the age of five was estimated to be over 42 million. Close to 35 million of these lived in developing countries.

Childhood obesity can cause social, psychological and health problems, and is linked to obesity later in life and poor health outcomes as an adult. Childhood overweight and obesity are attributable to a number of factors including:
-A global shift in diet towards increased intake of energy-dense foods that are high in fat and sugars but low in vitamins, minerals and other healthy micronutrients;
-A trend towards decreased physical activity levels due to the increasing sedentary nature of recreation, changing modes of transportation, and increasing urbanization.

So far, global and national attempts have been made only to address consumption of unhealthy food by children and increasing physical activities in children. But lately, evidence has emerged that childhood obesity is also linked to the feeding practices in the early part of life including infancy thereby giving credence to the concept of “nutritional programming”. The metabolic programming effects of nutritional modifications in the immediate postnatal life are increasingly being recognized to independently contribute to the development of metabolic syndrome in later life.

Breastfeeding plays a key role not only in infancy but also in shaping the future of the child. Exposure to infant formula during this vital period may in fact increase chances of obesity later in childhood. The risk increases as the beneficial effects of breastmilk that prevent obesity are replaced with the detrimental effects of infant formula.

Unfortunately, infant formula is promoted as an ‘equal and harmless’ alternative of breast milk. However, emerging scientific evidence portrays a different picture. A recent study has found that exclusively breastfed infants, in comparison with other study groups (formula fed infants, mixed milk fed infants and cow's milk fed infants), had lower weight-for-length z-scores during the first year, which suggests that breastfeeding may have a preventive impact on obesity development.

This protective effects persists even after stopping breastfeeding. Studies further show that among formula-fed infants or infants weaned before the age of four months or  introduction of solid foods before the age of four months, there was an increase in the energy and protein intake without the beneficial protection of breastmilk. This was associated with increased odds of obesity in the child by the time it turns three.

So, how does breastmilk provides protection against obesity and how formula contributes to obesity?  Beneficial effects of breastmilk, through Adipokines- Leptin and Adiponectin and hormones- IGF-I, Ghrelin, Obestatin and Resistin present in the mother's milk,  help in food intake regulation and energy balance.

For instance, Leptin and Ghrelin help in control of satiety in infants and can influence the regulation of energy balance in childhood and adulthood, protecting him against obesity. The hormone Obestatin reduces food intake, body weight gain, and gastric emptying and suppresses intestinal motility.

IGF-I, which is an insulin-like hormones, acts as the primary mediator of growth hormone (GH) effects. IGF-I plays a key role in both embryonic and postnatal growth. Adiponectin in breastmilk helps regulate the energy balance and can uniquely modulate neuroendocrine pathways involved in the regulation of body weight.

Infants fed with formula milk, as against breastmilk, have shown higher IGF-I levels. There is a positive correlation between IGF-I values and Z score for weight, BMI, tricipital skin-fold thickness, and age in healthy infants in the first 5 months of life.

A high protein intake in infancy, has been found to enhance the secretion of insulin and IGF-I with a consequent stimulation of cell proliferation, which promotes an accelerated growth and an increased adipose tissue.

Long ago it was recognised that formula feeding led to a greater insulin response resulting in fat deposition and increased number of adipocytes. Another study shows that overnourishment during the suckling period induced several adaptations in the energy circuitry in the hypothalamus of the offspring predisposing them for the onset of obesity later in life.

Another theory on the reduced risk of childhood obesity with breastfeeding and increased risk with bottle feeding revolves around the ability of breastfed infants to self-regulate their milk intake. A study has reported that Infants who are bottle-fed in early infancy are more likely to empty the bottle or cup in late infancy than those who are fed directly at the breast.

There seems to be enough evidence that shows that infant and young child feeding practices during the early part of childhood have a significant impact on childhood obesity. Replacing breastfeeding with formula and other milk, which is a common practice due to several reasons, may therefore be adding to the epidemic of obesity globally including India.

Inappropriate feeding practices, contributes to both undernutrition as well as overnutrition. There is a strong need to protect, promote and support breastfeeding and highlight risks of formula feeding. There is a need to recognise this important aspect of child nutrition while formulating policies and programmes for curbing obesity in children.

At the same time, research being conducted and reported on infant and young child nutrition should not hide dangers of formula feeding in the titles and abstracts, when research findings are pointing towards it.
Unfortunately, inappropriate feeding practices lead to a significant morbidity, through diarrhoea and pneumonia, in children  contributing to high rates of undernutrition also and hence  to ‘double burden’ of malnutrition.