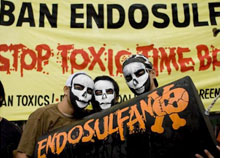 The court had earlier granted permission to export 1090.596 MT of technical grade endosulfan on September 30, 2011. At the December hearing, the court permitted 34 units of manufacturers and formulators to export the existing stock of endosulfan formulation by converting it into exportable unit.

The supreme court appointed joint committee had pointed out earlier that a quantity of 2698.056 KL of Endosulfan Formulation was lying in stock, unsold as an inventory. On November 21, the Pesticides Manufacturers and Formulators Association of India (PMFAI) filed an interim application to export the stock.
The three judge bench comprising chief justice SH Kapadia, justice Swatantar Kumar and justice KSP Radhakrishnan observed that while they were definitely not going to allow it's use in India if there were other countries interested then they should be allowed to import it.

The Democratic Youth Federation of India, the petitioners in the case, however had intervened and said that this was a ploy of the manufacturers to take more orders and expand business. The PMFAI counsel and senior advocate Harish Salve assured the court that this wasn't being done to increase export orders but to meet the export demand. The court had granted permission to export 1090.596 MT of technical grade endosulfan, while the export orders are for 1734 MT.

On December 13, the bench approved the three main manufacturers Hindustan Insecticides,Excel Crop Care and Coromandel International to meet and decide the existing quantity of endosulfan formulation which each of the three companies could dilute, repackage and export.

Hindustan Insecticides Limited,a public sector undertaking, shall communicate the same to the PMFAI. The rest of the 31 units will then hand over their respective quantities of formulation to the three main exporters. But the first preference will be given to Hindustan Insecticides- any amount beyond that will then be distributed to Excel Crop Care and the remaining to Coromandel International.

The cost of repackaging and export will be borne by the manufacturers who want their endosulfan to be exported. The court emphasized that proper precautions while exporting should be taken. The court also cleared that the permission to export formulations in no way is an approval to manufacture any more endosulfan. It reiterated that the ban on manufacture, sale and use of endosulfan imposed on May 13 this year continues. The next hearing is scheduled for January 20, 2012.