FSSAI goes on the backfoot soon after the study is released; denies claims made by themselves 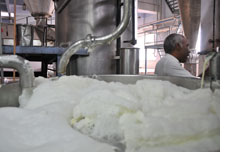 The results of a snap shot survey on milk by the Food Safety and Standards Authority of India (FSSAI) shows that nearly 70 per cent of the milk samples tested were adulterated and did not conform to the Food Safety and Standards Act, 2006. Packaged milk performed better than milk that was sold loose. Samples collected from rural areas fared better with only 30 per cent non-compliance as compared to urban centres.

Of the total non-compliant samples, the highest, nearly 46 per cent, belonged to the category of low Solid Not Fat (SNF) and this was due to dilution of milk with water. The other parameter for milk was the presence of skimmed milk powder, which was present in nearly 548 samples, out of which 477 samples contained glucose. A total of 1791 samples were tested.

The National Survey on Milk Adulteration 2011 was conducted to check the contaminants in milk, especially liquid milk, throughout the country.

The Delhi High Court took suo motu cognizance of the report on January 11 and asked the centre and the Delhi government to explain why 70 per cent of the milk samples lifted from the capital were found to be adulterated. They have been asked to submit their report by January 25.

FSSAI in the face saving mode

First, they issued a press release stating that 'non conforming' did not mean that it was 'unsafe for consumption'. They added that 'since the most of the milk samples did not adhere to the fat and the solid-not-fat (SNF) percentages laid down in the Food Safety and Standards Act they were sub standard quality of milk but not necessarily unsafe'. Skimmed milk powder was present in nearly 548 samples, out of which 477 samples contained glucose

Citing a case of faulty or mis-advertising, the FSSAI has said that a circular will be issued to big dairy houses to brand the milk right. In case Skimmed Milk Powder or glucose is added, the milk should be labelled as 'reconstituted milk'.

In an e-mail response, the FSSAI official added that 'These types of milk can pose hazards to the health if the water which has possibly been added is contaminated'. In all the confusion they have at least maintained that water was the main adulterant and if that was contaminated, by either pesticides or heavy metals, that could be hazardous.

Secondly, the executive summary states that they did set out to look for common adulterants in milk, both in loose as well as packaged milk and they analysed parameters such as fat, solid not fat (SNF), Neutralizers, Acidity, Hydrogen Peroxide, Sugar, Starch, Glucose, Urea, Salt, Detergents, Skimmed Milk Powder (SMP) and vegetable fat to ascertain the presence of adulterant.

However, the FSSAI later claimed that "the commonly occurring contaminants were not targeted but only a deviation from standards was reported". They were referring to the deviation in the the fat and the SNF content.

Of the other adulterants in the milk there is no mention about the quantity found, leaving it open to speculations. "The report is a broad findings about the various deviations as compared to standards, in two samples neutralizers have been reported in Nagaland, presence of SMP has been reported in some samples. There is no report of vegetable fat, hydrogen peroxide, etc," stated the FSSAI in an e-mail response.

The FSSAI official added that formalin or formaldehyde was found in a couple of samples in milk, "but that is allowed for preservation. May be where we detected it they must have put it in larger quantities," he said.

Bhasin completely refutes the claim made by the FSSAI official. He says its against the law and should not be added under any circumstances.

Formalin or formaldehyde is a chemical used for preservation and as a disinfectant. Its used by adulterants, illegally of course, in milk to increase the shelf life of the milk. Formaldehyde is known to be a carcinogen.

Third, the FSSAI initially mentioned that 8 per cent of the samples contained detergents but in a press release issued on January 12, the number of samples increased to 14 per cent. This they have attributed to lack of hygiene and sanitation in milk handling and packaging, detergents (used during cleaning operations) are that were not washed properly found their way into the milk.

However, its a known fact that detergent is used to make synthetic milk to increase the thickness and viscosity of the milk. An earlier study done by the Indian Council of Medical Research states that that detergents in milk caused food poisoning and gastrointestinal complications.

"They have not shared the survey with us. We have no idea where they collected the samples from. The survey should have been sent to the states first, we are the enforcement agency for the states. Once the report is shared with us, we will collect the samples, test it in our labs and then take appropriate action on whether the license has to be revoked or not," said Ashish Kumar, designated officer (headquarters), Food Safety Authority, Bihar.

Bihar has failed to meet the FSSAI standards. Kumar insists that the regular checks that they have conducted, they have never found detergent or urea. "Moreover, synthetic milk is not made here. Its a more common phenomenon in Meerut and Ghaziabad," he added. Its worth noting that FSSAI did not collect samples from either Meerut or Ghaziabad.

The Delhi Food Safety Authority disagrees with the report."None of our samples had problems with either the fat or the solid not fat (SNF) content nor were there any adulterants like detergent or urea found in our milk. The samples were found to contain skimmed milk powder, because these samples were collected in the months of the April and May when the supply falls and so SMP was added. But this is not hazardous to health, its just reconstituted milk," said SK Saxena, Food Safety Commissioner, Delhi.

Delhi has an estimated daily demand of 70 lakh liters of milk, about 90- 92 per cent of it is supplied by brands like DMS, Mother Dairy, Parag, Saras and Gopaljee. Saxena pointed out that despite such a  huge share of packaged milk in Delhi, out of 50 samples, only five belonged to packaged milk while the rest were loose samples.


Bhasin too is disappointed with the report. "The authority has simply created panic. The authority has told us that the problem did not lie with the organised sector but the unorganized one. But the way the report has been put out conveys the message that 70 per cent of the milk produced in India is adulterated."

Bhasin is worried that if clarifications are not made quickly enough, it is likely to create panic and the milk, that has had a good production this year to good monsoons and a good winter, is likely to suffer a setback.

The Central Advisory Committee of the FSSAI are meeting soon and they are likely to push the states to conduct more regular studies in their states and especially in religious places like Haridwar and Rishikesh. However, they remain mum on when they propose to share the study with the state enforcement agencies or the Indian Dairy Association.

But the labs in the states are either ill-equipped or lying almost defunct. "We do not have equipments to test for pesticides residue and heavy metals. If we are given one, we can do a much better job but without a lab with modern facilities its difficult," said Kumar.  Manpower too is a problem. For instance, in Bihar there are about 23 employees in the Food Safety Authority taking care of the entire state.

An ex-adulterant (one who was in the business of adulterating milk)on the condition of anonymity explained why certain adulterants were most common. Urea and carbohydrates like starch, potato powder, atta or flour, blotting paper, sugar and glucose was added to increase the SNF.
Solids like vitamin, minerals and proteins found in milk are classified as SNF. The higher the SNF, the better is the quality of milk and this decides the cost of the milk.
Studies show that adulterants like salt, detergents and glucose add to the thickness and viscosity of the milk, while starch prevents curdling of milk.

Neutralisers like Sodium Hydroxide, Potassium Hydroxide, Ammonia,  Carbon Trioxide (carbonate) and other alkalis are used to correct and optimise the pH value of unfresh or badly preserved milk so that they appear to be fresh milk. Hydrogen Peroxide, formaldehyde are used as preservatives but the former is an unstable chemical and is not recommended.

These adulterants are hazardous and cause irreversible damage to the organs. The Indian Council of Medical Research has stated that the other synthetic compounds cause impairments, heart problems, cancer and even death. The immediate effect of drinking adulterated milk with urea, caustic soda and formalin is gastroenteritis but the long term effects are known to be far more serious.