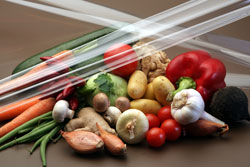 Pesticide residues found in food in the European Union fell in 2009 compared with 2008, announced EU's food safety agency on November 8. This, the European Food Safety Authority (EFSA) added was due to the tightening of safety rules and changes in patterns of pesticide use in Europe.

Compliance with the legal maximum residue levels (MRLs) for pesticides in food rose to 97.4 percent of the analysed samples in 2009, up by about one percentage point from 2008, the European Food Safety Authority (EFSA) said.

The improvement is due partly to the more effective use of legislation that compels producers and other industry players to implement safety systems as well as to changes in the pattern of pesticide use in Europe, EFSA said.

Harmonization of MRLs, which came into force in September 2008, may have also contributed to the improvement. Risks to consumers from short-term acute exposure to pesticide residues in food are unlikely based even on worst-case scenarios, such as consumption of large portions of a food item containing the highest recorded residue, it said.

A potential risk could not be ruled out for only 77 samples out of the 10,553 samples taken in the EU-coordinated programme. MRLs were more often breached in samples from countries outside the European Economic Area (6.9 percent of samples) than in those from the EU and European Free Trade Association (EFTA), which includes Iceland, Liechtenstein, Norway and Switzerland, (1.5 percent of samples).