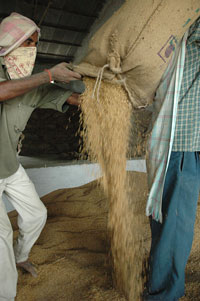 According to the International Rice Research Institute (IRRI), certain pesticides should be completely banned from use in rice and governments in Asian countries should improve their pesticides regulations. IRRI is based in Manila, the Philippines.

IRRI released an action plan listing potential strategies for scaling back pesticide use and adopting ecological growing techniques at a conference in Vietnam on December 16. The conference was on "Threats of Insecticide Misuse in Rice Ecosystems — Exploring Options for Mitigation".

The Institute laid stress on a "greener game plan" to improve the management of brown planthoppers (BPH),  which feed on rice sap and transmit plant viruses, and have in recent years  destroyed millions of hectares of rice across Asia.

Planthoppers is a major threat to rice production for it sucks sap from rice plants causing them to wilt and die, the IRRI said. It said planthoppers also transmit viral diseases that stunt rice plants and prevent grain formation. An outbreak usually occurs when the planthoppers' predators, such as spiders and insects, are killed off by the indiscriminate use or misuse of insecticides.

Earlier in 2011, Thailand, which is the world's largest rice exporter, banned two pesticides — abamectin and cypermethrin. These two pesticides according to IRRI are not only ineffective in controlling pests, but can also lead to brown planthopper outbreaks.

The report states that it is the overuse and misuse of pesticides that have become a key factor in planthopper outbreaks. The overuse and misuse of pesticides is the main cause of predator and parasitoid decline. Farmers who routinely spray insecticides in the early crop growth period to control leaf feeders such as leaf folder, for example, use chemicals that are highly toxic to parasitoids and spiders. Planthopper outbreaks are ten times more likely to occur in such sprayed fields.

Heavy use of nitrogen based fertilizers makes a crop rich in protein that forms a nutritious food source for the planthoppers and hence accelerates its population growth. The other reason is the increase in rice cropping intensity from single to double and triple cropping. This promotes the buildup of planthopper populations and eventual outbreaks if they are accompanied by short fallow periods in between the crops and by asynchronous planting. The absence of sufficiently long fallow periods (or of a non rice crop) and asynchronous planting mean that migrating planthoppers have a high chance of finding a rice crop in a suitable growth stage that will allow them to feed and multiply.

In Vietnam, the world's second biggest rice exporter, cypermethrin is among the most popular insecticides. Post the IRRI report, Vietnamese government announced that it would come out with a circular designed to phase out some pesticides, control pesticide marketing and encourage use of bio-pesticides.