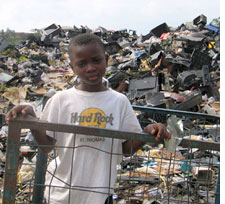 The outcome of the 10th Conference of Parties of the Basel Convention proved the skeptics wrong. This COP, held between October 17-22, was an important one that would decide the future of the Basel Convention and make a concrete contribution to Rio+20. However, many found the theme of the COP -“Prevention, minimization and recovery of wastes”- regressive.

Had it not been for the BAN Amendment, the COP was all set to be the burial ground for the Basel Convention. Gopal Krishna of ToxicsWatch Alliance, a research and advocacy group, explained that the theme suggested that there would be efforts to explore ways in which the Basel Convention could be made to turn wastes into valuable resources, so as to create business and job opportunities, while protecting human health, livelihood, and the environment.

Nevertheless the COP was a success. It achieved a major breakthrough on the final day when 178 Parties agreed to allow an early entry into force of law of the Basel Ban Amendment.  The Ban amendment prohibits all exports of hazardous wastes, including electronic wastes and old obsolete ships from developed to developing countries.

The deal was brokered by Indonesia and Switzerland Country Led Initiative (CLI) and was strongly promoted by the developing countries, China, the European Union and non profits including the Center for International Environmental Law, the NGO Platform on Shipbreaking and the Basel Action Network.

The Ban Amendment, adopted in 1994, effectively bans, as of 1 January, 1998, all forms of hazardous waste exports from the 29 wealthiest countries of the Organization of Economic Cooperation and Development (OECD) to non-OECD countries. But the Ban Amendment had been stalled for all these years due to uncertainty as to how to interpret the Convention.

Now it has been decided that the Ban Amendment will go into force when 68 of the 90 countries that were Parties to the Convention in 1995, ratify the agreement. This has been determined on the 'fixed time approach'. Already 51 countries have ratified the amendment, leaving just 17 more needed. It is expected that this can be achieved in 2-3 years. Currently there are 178 Parties to the Convention.

“Finally, the blockade has been lifted and the Basel Ban that has been held hostage now for many years is liberated. The Ban Amendment ensures that developing countries are not convenient dumping grounds for toxic factory waste, obsolete ships containing asbestos, or old computers coming from affluent countries. It enforces the Basel Convention obligation that all countries manage their own hazardous waste,” said Jim Puckett, Executive Director of the Basel Action Network.

Support for the Ban has been very strong from a vast majority of countries including China, the European Union, and developing countries. Countries that opposed the Basel Ban in the past, including Canada, Australia, New Zealand, Japan and India, decided to cease their opposition to allowing its entry into force at the earliest possible date. The United States has also opposed but is not a Party of the Convention.

Already 33 of the 41 developed countries to which the export ban applies have implemented it nationally, but the decision on the final day means that more countries will feel diplomatic pressure to ratify, and countries such as the United States who have never ratified the Convention will have to accept the ban as an integral part of the Convention once it enters force.

In another relevant development, Basel Parties disagreed that the International Maritime Organization’s Hong Kong Convention on ship recycling, provided an equivalent level of control to that of the Basel Convention.

While the BAN Amendment bans exports from all forms of hazardous waste from the 29 wealthiest OECD countries to the non-OECD countries, the Hong Kong International Convention for the Safe and Environmentally Sound Recycling of Ships, adopted in 2009, sugar coats the exports by stating that while recycling it should be ensured that it does not pose any unnecessary risk to human health and safety or to the environment.

During the seven day meeting, EU was supported by Japan, China, Denmark and US which stated that the Hong Kong convention provided for a level of enforcement equivalent to that of the Basel Convention. The International Ship Recyclers Association supported the Hong Kong convention as it focused on sound ship recycling and  strict regulations for ship recycling facilities.