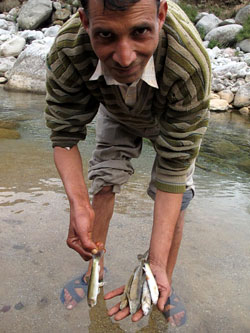 The West Bengal government on December 31 sanctioned funds of rs 6 crore for the cleaning up of the Karala river flowing through Jalpaiguri in the state. The government swung into action after the Central Inland Fisheries Research Institute confirmed that presence of abnormally high rate of endosulfan in the Karala river that killed thousands of fish belonging to 33 species. This was reported on November 28.

The findings were mentioned in a report submitted by the Institute to West Bengal's fisheries department. The report states that the 'abnormal content of pesticides recorded in fish samples can be considered a definitive cause for such large scale fish mortality in Karala river'.

The institute has also found that water samples, those collected from the areas where the river fringed the tea gardens, contained two other insecticides also. The  fisheries department however maintains that the other pesticides did not pose any threat to the aquatic organisms and that the report clearly stated that it was endosulfan that had contaminated the water and killed the fishes.

The West Bengal Pollution Control Board’s Siliguri regional office too had collected water samples from different points of the river in Jalpaiguri following the appearance of the dead fishes. The tests conducted by the board's laboratory showed that the samples contained endosulfan 1 and 2, methyl parathion, dieldrin, chlorpyriphos, methyl malathion and DDT.

However, the samples had higher levels of endosulfan and methyl parathion than all other pesticides. Endosulfan is being sold under the brand names of thiodan and endoceal despite a Supreme Court ban on the manufacture, sale and use of the pesticide.

In order to decontaminate the river, water has been pumped from the Teesta river into the Karala river as the two rivers flow just a few hundred metres apart in Jalpaiguri before the Karala empties into the Teesta a few kilometres from the town.