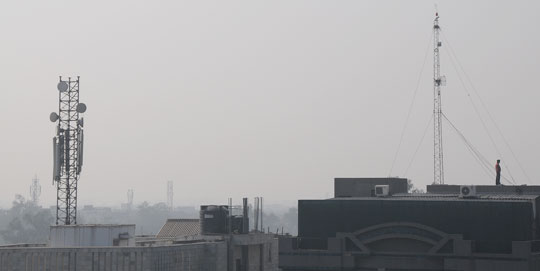 -that Electro-Magnetic Radiations (EMRs), emitted from mobile towers, interfere with the biological systems affecting birds and bees, an indication that doesn't augur well for other species.

- that EMRs are the potential cause for the decline of animal populations and deterioration of health of plants and humans living near radiation sources such as phone masts.

- that EMRs are responsible for declining number of birds especially sparrows and also for the unusual phenomenon in bees known as ‘Colony Collapse Disorder’ (CCD). CCD is when there is a sudden disappearance of bees from their hives.

- that WHO/International Agency for Research on Cancer (IARC) has classified radio frequency electromagnetic fields as possibly carcinogenic to humans (Group 2B), based  on  an  increased  risk  for  glioma,  a  malignant  type  of  brain  cancer 1 , associated  with wireless phone use.

- that there are not enough studies in India to show the impact of EMRs on flora and fauna of species in India; the Ministry of Environment and Forests prepared a report on the possible impacts of communication towers on wildlife in October 2011.

- that the guidelines on exposure limits to EMFs need to be refined. India currently follows the ICNIRP (International Commission on Non-Ionizing Radiation Protection) Standard that is based only on thermal impact of Radio Frequency and are dismissive of current epidemiological evidence on impacts of non-thermal nature on chronic exposure from multiple towers.

What the Ministry of Environment and Forests suggests

- EMRs should be treated as pollutants

- The forest department should be consulted before installation of cell phone towers in and around national parks, wildlife sanctuary,  bird sanctuary and zoo

-The report suggests that if new towers must be built, they should be constructed to be between 80 feet and 199 feet tall to avoid the requirement for aviation safety lighting

- In order to prevent overlapping high radiations fields, new towers should not be permitted within a radius of one kilometer of existing towers

-The towers should be built on platforms so that in future the towers can be relocated away from areas of high migratory bird traffic, wetlands and other known bird areas

There are a couple of states like West Bengal and Delhi that have in the past recommended similar guidelines for the installation of the mobile towers. The Bombay High Court had asked the state health department and Maharashtra Housing and Area Development Authority (MHADA) in May 2011 to submit rules pertaining to the installation of mobile towers in the state. The Punjab and Haryana High Court had ordered the government, in June 2011, to issue warnings of health hazards of mobile tower to the public.