Germany is the epicenter of an E coli outbreak in the European Union (EU). Since its outbreak on May 2, death toll has gone up to 38 in Germany, with nearly 3300 people falling ill. Several cases of kidney complications too have been reported. 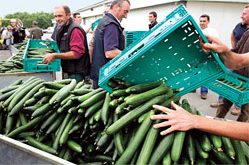 Cases have been registered in Austria, Britain, the Czech Republic, Denmark, France, The Netherlands, Norway, Spain, Sweden, Switzerland and the United States. In each of the cases, those infected had recently travelled to Germany.

A joint statement from the country’s food safety, disease control and risk assessment agencies declared it had been able to “to narrow down the cause of the outbreak with a high degree of epidemiological certainty to the consumption of sprouts”. "It's the bean sprouts," said Reinhard Burger, head of the Robert Koch Institute (RKI) at a news conference. The source of the E coli outbreak was earlier pinned on Spanish cucumbers before the focus shifted to locally grown beansprouts.

German officials also lifted previous health warnings against eating cucumbers, tomatoes and lettuces, while warning businesses and consumers that any beansprouts from the Lower Saxony farm at the centre of the investigation be destroyed.

The German bodies confirmed that a multi-agency task force would now be set up with European authorities to learn the lessons from the outbreak that has cost dozens of lives, cost farmer hundreds of millions of euros and dented public confidence in the safety of the region’s food supply chain.

The European Union has approved 210 million euros ($286.78 million) in emergency aid for vegetable farmers hit by the fallout from the E coli bacteria outbreak. The aid is for producers of cucumbers, tomatoes, lettuce, courgettes and sweet peppers which had to be withdrawn from the market since May 26 as a result of the outbreak in northern Germany.

Under the deal, farmers will be paid a maximum 50 per cent of the usual producer price in June, with a final figure confirmed on July 22 once member states confirm the volumes to be covered. Farmer associations estimate that farmers across the EU would have suffered losses between 500 - 600 million euros.

Spain, France, Poland and Slovakia voted against the package after demanding more help for farmers producing a wider range of fresh vegetables. Spanish farmers say they have lost 225 million euros ($307.19 million) every week since the crisis erupted. The Spanish producers were worst hit after Germany initially and erroneously blamed cucumbers grown there for the outbreak.

Farmers were further hit when Russia imposed a blanket ban on vegetables from the 27-nation EU bloc, a move blasted by EU officials. Moscow agreed at a summit with the EU on Saturday to lift the ban although it was not immediately clear when the announcement would come into effect.

A Rare Strain
The rare E coli strain has been identified as Shiga toxin-producing E coli (STEC), an enterohemorrhagic E coli (EHEC), that causes blood diarrhoea and is a possible source of hemolytic-uremic syndrome (HUS), affecting the kidney.

Though, E coli is common bacteria in the gastrointestinal tract and part of the normal bacterial flora, some E coli strains could produce serious infection. This E coli variation is a member of the 0104:H4 strain and is a highly virulent mutated strain.

WHO recently stated that this strain of E coli "is a unique strain that has never been isolated from patients before" and there may be "various characteristics that make it more virulent and toxin-producing".

E coli strains are almost never resistant to antibiotics, but a genetic decoding of this strain by Germany's Robert Koch institute reveals that the 0104:H4 strain is resistant to eight classes of antibiotics and their combinations. These include the more common ones like penicillin and tetracycline.

The 0104:H4 strain also produces special enzymes called the Extended-Spectrum Beta- Lactamases, that makes it resistant to cephalosporins, the most widely used antibiotic in hospitals, according to the UK Health Protection Agency.

The strain also produces two genes- TEM-1 and CTX-M-15- that are so deadly that people infected with such bacteria experience critical organ failure and simply die.

E coli Conspiracy Theory
The theory doing the rounds is that this superbug has been bioengineered in the lab, since the resistance to so many antibiotics requires repeated and sustained exposure to antibiotics and then released into the food chain. (http://www.naturalnews.com/032622_ecoli_bioengineering.html)

Mike Adams of NaturalNews,a website tracking issues related to health, environment and consumer affairs, writes that this has been done to take over global food supply and outlaw raw fruits and vegetables to flood the market with dead and processed food.

"All this is happening on the heels of the EU ban on medicinal herbs and nutritional supplements - a ban that outlaws natural therapies that could keep people healthy and free from diseases." These strains, he adds can be treated with a combination of natural full spectrum antibiotics like garlic, ginger, onions and other medicinal herbs.

EU's Blame Game
When the outbreak was announced, contaminated vegetables, particularly a shipment of cucumbers, from Spain was blamed by Germany for the outbreak. Dutch supplies were also named as possible sources. As Germany stayed away from fresh vegetables due to the alert, trade in these countries were affected.

Spain, in 2010, had an horticultural export market worth 8.6 billion Euro in Germany, France, UK and other EU countries. Initial reports suggested Spanish organic cucumbers as the source but that theory was later done away with. Spain, though still remained in the eye of the storm and later it was found that their cucumbers had a different E coli strain.

Spain demanded a compensation from Germany and EU for the losses to its farmers that are estimated to be about 200 million Euro a week. Spain's Secretary of State for European Affairs, Diego Lopez Garrido demanded "accountability from those who have blamed Spain for this matter."

Leaked cables from Wikileaks showed that Spain resisted the introduction of Genetically Modified Organism's into its agricultural system, even as the US government covertly threatened political retaliation for its resistance. Adams wrote that the false blaming of Spain for the E coli deaths is perhaps a retaliation for Spain's unwillingness to jump the GMO bandwagon.

The Dutch too lost about one third of its market as Germany shut its door to them. The prices dipped and then Russia, announced a ban on EU products, costing the Dutch farmers nearly 50 million Euro a week.

First, Russia and Portugal has imposed a total ban on vegetables from the EU. The EU farmers, especially in the north, who were already expecting a poor wheat produce due to poor rains had to deal with a ban on their produce.

Russia's embargo was criticized by the EU as unjustified and even warned Russia of a possible hindrance it could face to join the WTO club. But Russia stuck to its guns and stated that import restrictions on food that might harm people's health were in line with WTO rules.

Back home, the Food Safety and Standards Authority of India(FSSAI) had alerted its ports and airports which receive imports, especially fruits and vegetables, from Europe. "Its too early to speak about its impact in India. Our scientists are investigating the strain and trying to study how it will impact us," said VM Katoch, director general of Indian Council of Medical Research (ICMR).