The Supreme Court, on May 11, dismissed the curative petition filed by the Central Bureau of Investigation (CBI) to enhance the punishment of the accused in the Bhopal Gas Tragedy case. The petition was filed in August 2010 against an order of the apex court that diluted the charges against the accused in 1996. The court said that the CBI approached the court after a long period of 14 years and there were no sufficient grounds to invoke the curative jurisdiction. 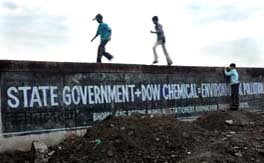 Originally the accused in the bhopal gas tragedy case were charged of culpable homicide under the section 304 II of Indian Penal Code (IPC) whuich carried a maximum punishment of 10 years. But the Supreme Court in September 1996 reduced the charges to causing death by negligence under the section 304 A of IPC which carried the maximum punishment of two years. On the basis of these charges, a sessions court in Bhopal had announced two year punishment to seven accused in the case icluding the then chairman of Union Carbide India Limited Keshub Mahindra.

Upholding its 1996 judgement, the court said that the evidence provided by the CBI to the court were not sufficient to charge the accused of culpable homicide. However, it clarified that the 1996 order did not stop the trial courts from enhancing the charges. The victims had filed the apllications for enhancement of charges in the Chief Judicial Magistrate’s Court of Bhopal in April 2010. However, the court rejected it on the basis of the 1996 Supreme Court judgement.

The bench headed by chief justice SH Kapadia cleared that it was a wrong understanding of the law by the Chief Judicial Magistrate's court when it said that it could not hear an application against the Supreme Court’s judgment. If more evidences had emerged at the later stages which were sufficient to charge the accused for the culpable homicide, the trial court could always hear the matter.

N D Jaiprakash of Bhopal Gas Peedit Sangharsh Sahyog Samiti, a forum fighting for the victims’ rights said, “Its disapointing that the Supreme Court has upheld the 1996 verdict which did irremedial injustice to the Bhopal victims. Asking the sessions court for the revision of the charges will start the whole legal battle afresh which may take another 20 years to reach any conclusion.” He demanded for a special court to hear the Bhopal case on a day-to-day basis.