No incineration of toxic waste in Nagpur 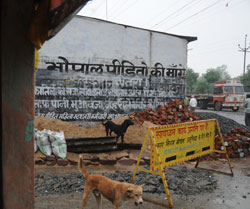 Madhya Pradesh High Court has taken cognizance of the Maharashtra Pollution Control Board's objection. In a temporary relief to Nagpur residents, the Jabalpur bench of the Madhya Pradesh High Court, on December 21, turned down the Centre’s plea for a trial run of burning toxic waste from the defunct Union Carbide factory at the Defence Research and Development Organisation’s (DRDO) incineration facility in the city.

The waste has been lying in the plant premises in Bhopal for the past 27 years. Maharashtra has been resisting Madhya Pradesh’s attempt to dispose of the waste in Nagpur. The Union of India and Central Pollution Control Board (CPCB) had sought authorization to DRDO facility at Borkhedi in Nagpur for storing 2.5 million tonnes of the hazardous waste, a legacy of the 1984 Bhopal gas disaster, for the trial run of the incinerator.

Taking cognizance of the Maharashtra Pollution Control Board (MPCB)’s objections, citing non-compliance of inter-state hazardous waste transport rules and non-functional incinerator, the court has directed the Centre to instead carry out the incineration test at any of the country’s select laboratories. It asked it to analyse fumes, residue and its possible environmental impact and submit a report within three weeks.

The court has also clarified that the Union of India can file replies on the MPCB’s objections on behalf of the DRDO and the Union environment ministry. The next hearing of the case has been slated for January 17.

The Indian government's endeavors to get more compensation for the Bhopal gas disaster victims received a setback with the US-based Union Carbide Corporation (UCC) calling India's attempt an “affront to the rule of law”.

The government had filed a curative petition in the Supreme Court in December 2010, seeking enhanced compensation calculated on the basis of higher number of victims than the number considered earlier. The company had made a settlement of US $470 million (Rs750 crore) for all the victims. The Indian government was instead demanding Rs 7413 crore.

The settlement of Rs 750 crore was based on the earlier figure of 3,000 deaths and 70,000 injury cases; the curative petition put the death numbers at 5,295 and injury figure at 527,894. The victims of the tragedy, on the basis of a report of Indian Council of Medical Research, say the actual death figure is five times higher than the figure quoted in the curative petition and that most of the injuries were of permanent nature and not temporary as stated by the government in the petition.

In the affidavit, which was filed in the court secretly (no copies were circulated to the parties to the case), UCC, which is now owned by Dow Chemicals,  said compensation was given more than four years after the accident, and that this period provided the government sufficient time to assess the damages.

The affidavit stated that the Government of India should return the settlement funds to UCC with interest if it wants curative action. For this, the government would have to prove UCC’s liability during trial and establish the actual damages sustained by each individual claimant. This, the company says, would result in compensation becoming less than the amounts awarded from the settlement.

In the affidavit, it also pointed out that the issue of compensation has been raised twice before and the court had ruled in favour of the company. “Nothing has changed since the last time the court rejected the allegations in 2007—except the position of the Union of India, which previously opposed attempts by others to reopen the settlement on the very same grounds it is arguing today,” it said.

Sanjay Parikh, the lawyer representing the victims in the compensation case against the Union of India, says, “the compensation that was given was meagre and there are a lot of people who have not been paid. They should be paid whether it is from the money given by UCC or the Government of India.”

The refusal to acknowledge the liability is an indication that India needs to put in place a better legislation to ensure safety of people working and living near hazardous factories. The Civil Liability for Nuclear Damage Rules of 2011 were notified just ahead of the prime minister’s scheduled meeting with the US president in Bali in Indonesia on November 18, the same day UCC filed its affidavit.

ToxicWatch Alliance (TWA), an NGO against corporate crimes, suggests that a high powered parliamentary committee be set up to examine how to ensure transnational corporations like UCC can be made liable. The Union government should desist from introducing the Companies Bill of 2011, under which the independent directors are not liable for accidents. This should be introduced only after introducing a liability regime for national and transnational corporations, says Gopal Krishna of TWA.