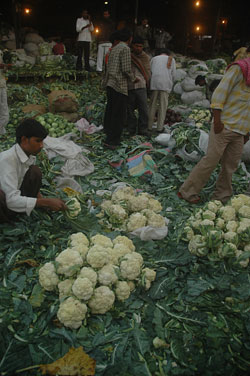 The Delhi High Court, on December 9,  directed both the Centre and Delhi government to devise ways for checking adulteration of vegetables by harmful pesticides. The court set a deadline for to months for both the centre and the state. The court is keen to know exactly at what stage the vegetables are adulterated.

The direction by the High Court bench is the outcome of a report by Consumer Voice, a consumer group which claimed high levels of pesticides in vegetables in the mandis in the capital. The bench has asked the authorities, including senior health ministry officials, Union ministry of agriculture, Delhi government's health secretary and Delhi Agricultural Marketing Board (DAMB) officials to file their response in this regard by February 23.

The hearing in this case began in the High Court in November 2010, after it took cognizance of the findings of the non profit Consumer Voice that had found that 35 different types of fruits and vegetables  picked from Delhi markets were found to have high pesticides content beyond permissible limits.

The court had immediately ordered an inquiry into the matter and sought government's response. It had also formed a panel of lawyers to examine the pesticide content in vegetables at various laboratories. However, the panel claimed that the vegetables were safe to consume and did not show any sign of harmful pesticides. The samples collected from by the panel were tested at four different accredited laboratories.

The NGO, Consumer Voice, and the amicus curiae VK Rao objected to the report, saying the government report was not "authentic" and requested the court for further directions. According to the findings of Voice the quantum of pesticides used by farmers in India was 750 times higher than the European standards.
"Out of five internationally banned pesticides, four were found to be common in vegetables and fruits. These pesticides cause headache and affect fertility and can damage the kidney and liver," the report had said.

The next hearing is scheduled for February 23.